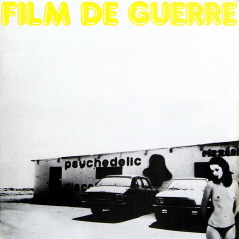 Postpunk band from Switzerland. And guessing from the titles, they came from the French-speaking part.
Can't find a lot of info but two members were in punkband Technycolor that released two 7"s.
Three songs were released on 12" with an almost identical sleeve (posted on Weird Cheese in 2008 but link is dead).
A very interesting record which gets hard-to-find these days.
FLAC provided by bX-59cppw. Converted to MP3 by me.

Film De Guerre - FLAC
Posted by Curious Guy at 9:25 AM

Dear mr. curious
Thanks for this post and thanks for keeping this blog going after all these years. You're still by a long stretch the best guide one could wish for into the murky and dim regions of 80's postpunk.
And thanks also for providing us with lossless files whenever you have them at hand. it's much appreciated.

Awesome. been loving your blog for years now.

But I bugged out on the two tunes I was able to hear by Never Blue on You Tube.

Any chance (whenever) you might repost the Freak City 12'' for my sad ass?

Hi Mike, I'll do at the end of the week, OK?
Thank you both for the appreciation.

thank you so much.


I'll come back to check.


The guy who runs Mutant Sounds once had this up, but I was way late to the game and missed it ( all megaupload links)

So far he has not re-posted it, but.. I was wondering if you had ever heard of the post punk compilation "Tales From The Crypt(1981)"

it has Sad Lovers, Exhibit A, S-Haters...

it's a holy grail for me. one day I hope to have a rip of it, at the very least.

thanks for everything. really. your blog is super special and has provided countless hours of superb entertainment!

I got it from Mutant Sounds. Quality wasn't that good (128 bitrate) so I hope to get better rips of both Crypt comps. in the future. I definitely can't afford them if they pop up for sale.

yeah... wonder why he would even bother posting 128 rips.

that's not being kind .

a user who goes by the moniker: fuckonthecover

pretty impressive. how much good stuff this one guy has put up there.

One of the inserts from Soft Drinks, is actually an advertisement for The Thing Of The Crypt compilation...my scanner isn't working properly though long time now, hence, i'll have to scan them at some later point...

Very nice! Many Thanks !

this is Mike from NYC.

thank you for the link.

I asked nicely at Mutant Sounds for a re-up, but... never happened.

but...it's just one of those things! elusive!

I have the (exceedingly low) rip of "Another Thing From The Crypt".

I guess it's been a "holy grail" of mine. I would love to own the vinyl..but one day...a rip will suffice!

that Valley Forge 7'' was insane!

They appear to be dead again, FYI.