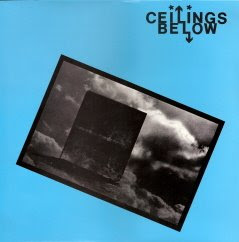 Interesting wave band with an arty edge from Brooklyn, Ohio.
There's not alot of info to be found on them.
Released on Cleveland label After Hours Records, run by the band Home And Garden. This was an offshoot of Pere Ubu.
Other bands on the label are Radio Alarm Clocks, Terrible Parade, Primary Colours, Tag-Yr-It and Nightschool. Another interesting record on the label is the 'They Pelted Us With Rocks And Garbage' comp. album featuring punk, wave and indie bands from Ohio.
Les Black of Les Black's Amazing Pink Holes does vocals on 'Drone'.

note: tracks 1 & 2 ripped as one track.
Ceilings Below

I really liked this

I was the drummer in the band. We played a lot of shows in the Cleveland and Kent area in the mid 80's. We tried really hard to make serious "alternative" music because there were so many punk bands in the area doing their thing we wanted to be different. Lots of rock and wave influences in the band like the Beatles, XTC, Pink Floyd, Cabaret Voltaire, Joy Division, and U2. Keith and Linda dated for a long while before and during the band. When their relatonship went south, Keith tried to keep the band going but it was hard. Our last show was in NYC at a place called The Jungle at the new music seminar in 1988 I think. Lots of technical problems an empty room were the icing on the cake and Ceilings Below was history.
Maybe of some interest, before I started drumming in the band, they world practice in an apartment to an early drum machine. Linda Don and Keith often wondered what the Ceilings Below them must sound like. The rest is history.

For anyone interested, there are still copies of the album available and can be had for a nominal fee. You can contact me at SHanula@Columbus.rr.com.

Hello Stephen, thanks to drop by and leaving a comment here. Appreciate this a lot. Thanks for the extra info as well.
All the best to you.

Thank you for your great blog. I have only recently discovered the wonderful world of 80s blogs on the web and every night I find myself searching for those long for gotten gems. Thank you and thanks to all the other bloggers, the 80's will never die.

Link is dead. Can anyone re-up?