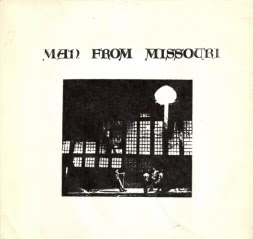 Ever seen a 10" flexi? Well here's one from the enigmatic Man From Missouri. You could already hear a song by them on the 'Ultraviolet' comp. album posted a while ago.
Man From Missouri released an album 'Bwanger Tatalingus Debase' on the Greek chapter of Nate Starkman & Son label. Only 500 copies made so it's hard to find. Seems there's also a limited pressing in the US on Caroline.
This flexi was probably made as a promo for the album as the first three tracks also appear on the album. 'Ohms Way' is an exclusive track and a great one!
Drummer Steve Hadley later played in Acetone. Art Byington also in The Dogz, The Poetics, in the 90's line-up of Destroy All Monsters and also in Raymond Pettibon's backing band Supersession on 'Torches And Standards'.
There's a bit of scuffing noise in the beginning of 'Cover Tailor' which I couldn't remove.
Rainy Day Sponge; this post is for you! Thanks for opening my ears to some unknown gems of the LA underground scene.

Man From Missouri
Posted by Curious Guy at 6:53 PM

Well, this is an impressive post (and a very unusual format indeed, even for a demo).
You certainly did a better search than me, regarding the members of this mysterious band. Maybe they want to keep this "mystery" (a band member that did comment on my post of their LP, didn't add any more information about the players. "This is a ghost from my past" he said.) Well done!

Hi Curious Guy. I just thought I'd commend you for your efforts. Great what your'e doing!!!

As far as Look Back in Anger is concerned, I do have some material. As I'm currently online on another PC, I can't check..
Wasn't Caprice a mini LP?
Probably getting muddled mate!

A big fan from your early days, I have a request, "The Surrealist Mystery" 12'' from the belgian band La Muerte. I remember, it contained a great cover of Wild Thing. I used to have it in a red cover, although I remember it also in blue. What do you say?

Thanks for all the great music Curious Guy !

hey friend - looks like mediafire has a problem with this file -- it returns a "forbidden" message when the dl link is clicked.
thanks again for your efforts.

Works fine on my end. Don't know what that 'forbidden' message could be. Maybe try again?

hi curious guy -- i was using IE as my browser, and tried it again today, and had the same problem. i decided to try it from firefox, and had no trouble. (your link to mediafire is fine, it's the link on mediafire's page that was giving me the problem). i'm leaving this message in case any other IE user runs across the same problem. anyhow, sorry to have bothered you, and thank you for checking on it. wm

Hi Curious Guy
I just wanted to let you know that the 1990 dates floating around the internets are only the date of the greek reissue. The original untitled Man From Missouri LP was recorded and released in 1986. The Flexi was somthing the band handed out at shows in 1985 and beyond and the lyrics of the song Epitaph are pretty much straight lifted from a Lee Quinones wild style subway car.

Thanks for the info. Didn't know that the original album (which I have) was released in 1986.

I have this flexi, the Ultraviolet comp, and the Bwanger Tatalingus Debase LP - only my Bwanger LP looks completely different from the Greek release. The cover is greenish and the center labels on the LP are hand painted and the tracks written in, what looks like, sharpie! This may have been one of the original self released copies previous to the Greek release. Who knows. I just know the music is badass!

That's an original copy you have.

Nice to know the Date of the private release. Great album. reminds me of some one or band I cant recall.
Anyways, wish the link worked for the flexie
creatured

Wish the link worked.
Nice to know the release date. I have a copy of the greenish cover. Goodwill find

if anyone find a working link please let me know and i'll post if I find one.
danke