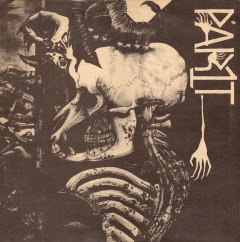 Part 1 was a gloomy sounding punk band from the UK. The 'Pictures Of Pain' was strangely enough released on a US hardcore label called Pusmort. Pushead, singer of Septic Death and the guy behind the label was very impressed by Part 1. He even included some tracks on the well known 'Cleanse The Bacteria' comp.LP.(check the Good Bad Music blog for the rare bonus 12" that came with this record)
Off course, the hardcore kiddies didn't pick this one up so, if you look around, you still can find this album for a decent price.
If anyone has the 'Funeral Parade' 7", released prior to the album, and wants to get rid of it: I'm really dying to get my hands on it.

nice wun, haven't heard this lot for ages, came from milton keynes way I think crossed over with the anarcho scene, got some stuff in my fanzine archieves about 'em, had their first 7inch, but it got stolen years ago, along with a load of other good shit, which i'm slowly replacing thanks to blogs like this.

Hi Nuzz,
thanks for the comment. Damn those who steal records from others. Especially when these records are nearly impossible to replace.
Hope to see some Part 1 archive material on your blog. Always fine to get more info on bands like these.

wow what a eerie record. great artwork, great style, & a strange sounding guitar. thanks for this freaky record and countless others on your great blog. keep up the good work sir.

yes this seems to be exactly my type of stuff. I like "gloom" :). Thanks.

Used to have this vinyl. Would love to get again. It seems link is not working anymore.

i search about this band but i cant find anything,but now if i download it, the winzip called it:this archieve is not a valid zip archieve
??????????

I'll try to download it myself soon to see if there's any problem. Otherwise I'll upload it again.

Nuzz is right, they actually came from Bletchley - I recently moved from a house quite close to some surviving graffiti

Met them once when they came to town to do an interview for a fanzine, very dark and broody guts - just like thier music

Don't know what happened to them though

YES! Holy shit, you are the man for posting this!

Part 1 are interviewed and covered in Ian Glasper's new book _The Day the Country Died: ANarcho Punk 1980-1984_ (along with friends Rudimentary Peni and Amebix, two other AMAZING bands).

I have loved this band for awhile now, and am having an audio orgasm to see this on your blog. You have seriously one of the coolest mp3 blogs I've come across.!!

Hi there,
is there any chance of this one being re-up'd?
thank you

Hi there,
is there any chance of this one being re-up'd?
thank you

Will re-up ASAP. All my quicksharing files were deleted a few days without reason. Expect the Part 1 within a few hours.

Great post and great record. I picked this up on vinyl years and years ago, still a classic. If you get your hands on the ep that came out before this, post it please!

I love PART1. Recently acquired the "Funeral Parade" EP too. And I've had 3 of "Pictures of Pain" through my hands, but I've given 2 to friends.

Anyways, I could scan the EP's cover and upload it if anyone would be interested.

The artwork for this is now at http://www.killyourpetpuppy.co.uk/news/

The art work for this is now up at:
http://www.killyourpetpuppy.co.uk/news/

Also lots of related stuff including the 1st 7" if you use the search function.

The "In the shadow of the cross tape is now available here:
http://www.killyourpetpuppy.co.uk/news/?p=2656#comments

The "In the shadow of the cross tape is now available here:
http://www.killyourpetpuppy.co.uk/news/?p=2656#comments

Hey CG, it would be really nice if you find some time to re-upload this LP (and 7'' if you have it). Thanks.

I could re-up but all their stuff is going to be re-released soon on vinyl.

Many thanks, once again! Cheers, d.