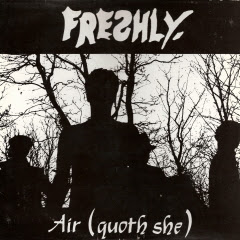 Danish band Freshly originally started as Freshly Riots. As Freshly Riots they released 2 records. The first is the 'Delightfully Fresh' 7" in 1982. Never heard this one. Second release is the 'Hope' album released in 1984. This album contains 11 tracks of punk inspired by early Stranglers.
For the second album 'Air (Quoth She), they shortened the name to Freshly and went for a more postpunk sound, with some hints to Killing Joke.
All records were released on their own Bondeskiver label. Another release on this label is the 'Complication' comp. LP with 10 punk & new wave bands from Denmark as War Of Destruction, Electric Deads and Sods. Also has 2 tracks of Freshly Riots.

Freshly
Posted by Curious Guy at 10:43 AM

Great to see some more nordic bands discovered on the internet, although freshly is not one of my favorites. Ive recently started a new blog where i will upload mostly swedish new wave and postpunk but also danish norwegian icelandic and finnish. Ill start off with language in swedish but if there's some international interest ill change it to english. Please check it out, ill keep looking for more great posts from you.

Thanks for the comment Albin. I'm definitely interested 'cos I don't know many postpunk bands from the north. I'll add a link.

what an amazing band!!!
thanx so much for this great post!

Hey Curious, can you fix this, dead link..and please add me to your bloglist.

Anyone have this? The D/L link is dead. Just heard them and want to hear more. :)