Another 12" of Trisomie 21. Title is a bit misleading. The band was probably planning to quit but already released a new album 'Distant Voices' in 1992.
The 'Final Work' 12" completes the 12" series. Expect to see some albums in the future.
Thanks once again to Eleni. 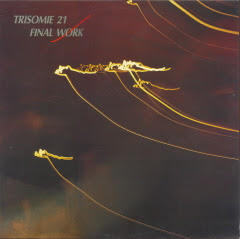 Great coldwave band. One of my french favourites. Thanks for posting.