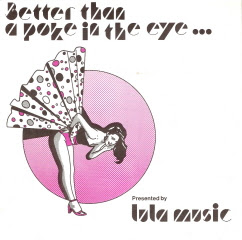 The bands were all based in Newcastle. Lula music was a Newcastle music co-operative. Good to see this again, still sounds great!

Thanks El Tel for the info. Still sounds great indeed.

Sadly, their last 7" is nowhere to be found... but they did release a new LP in 2011 called 'Rebellion & Romance' which can be downloaded through amazon here: