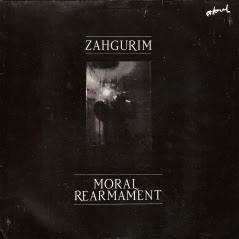 That would be great! The Young Soldier 12" was on eBay lately but I can't afford the prices these go.
just take your time, I'm in no hurry.

Thank you for this, I've been looking for it for twenty years! LOL

A snippet of info on the mysterious Zahgurim: in the mid-80's, i became friends with one of the band, a fella by the name of Andrew Wadsworth. He lived in Dewsbury, West Yorkshire, UK at the time, after a period of living in Kansas with his girlfriend and future wife Michelle (she was a native and they had William Burroughs for a neighbour!) He was a lovely lad - Michelle was a super girl too - and then there was this unsettling music he made: it was hard to equate the two, if you know what i mean. I went to Andy and Mimi's wedding in Dewsbury in '85 or '86 and for their first dance at the reception, they played 'Roman P' by PTV. Needless to say, I've not been to a wedding with such an interesting choice of music since. Unfortunately, in an age before wireless communication and reliable answering machines...well, we lost touch. I often wonder what happened to them, and whether Andy ever made any more music. And i never did get the full story behind Zahgurim either. I can't find you on the Net, but if yr out there, drop me a line - i'm on Fakebook. Best, Andrew Micklethwaite.

"Andrew Wadsworth, an apostate psychic youth from kinky England" gets a mention in Burroughs' 1995 book My Education

I was in this band. We never meant to be mysterious. We just never thought anyone was listening. Strange that I should type the name in after all these years and find this, especially since I lost my own copy of the LP so long ago.

Thanks for leaving a coment here. Still no name so that adds to the mystery ;) or is it Andrew?
Maybe some people are interested in getting in contact with you. Some music demands to be reissued. You'll never know.

No I'm not Andrew.

Actually he left the band a while before the album was recorded, so doesn't appear on it, but he did play the Berlin Atonal gig and I think there are some recordings of that on the net somewhere.

I'm so pleased that the music has found its audience at last, but I don't really have the desire to dwell on the past - I guess I'm just a bit flattered that people were listening at all, never mind waiting 20 years to get their hands on a copy.

Why did you name one of the track "Panstwo"? It means in polish "The State". Did you have any connections with Poland?

I'll pick up the conversation. I'm another member of the band. None of us are currently in touch...

We collaborated with Andrew Brown for our first live performance at Lanchester Polytechnic, Coventry in 1984. Andrew had been spending time in Poland.

Thanks for that picture.

I bought this at Wax Trax in Chicago, when it was released. The track New Flesh appeared on every old-school industrial mix-tape I made since. I am going to give it another spin. I'm sure I'll find much more to appreciate.