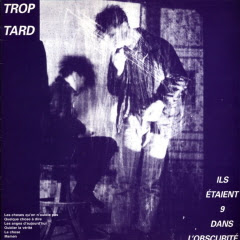 Link Removed. Buy the reissue on Infrastition!
Posted by Curious Guy at 2:30 PM

Hi!
I have another tape called "Photodramme" from 1987. If you are interested send me a message: coldfinger@free.fr .

This has been on my want list for a long time, as is the cassette.

Thanks for putting it on here, I only had a CD-R with no track names.

I'd love to have someone give the cassette the same treatment.

does anyone know what year this album was released?

Sounds awesome- speaking of French wave; looks like Complot Bronswick has put out a new 2CD set which has been long awaited:

Checked that vinyl-collector site. A copy for sale for 130 euro!!
Infrastition does a great job on re-releasing those French cold wave bands. Still need to get a few of these.

i've been all about coldwave on Systems of Romance lately... let me know if there's any bands you want me to dig something up on. i need to pick up a lot of the reissues on Infrastition myself, but they're terribly expensive to import to the US.

otherwise- haven't heard this one, so hooray!

Hi Vincent!
Very glad you liked Trop Tard album, is a great collectible band..but as you said, their whole discography is almost impossible to find.

speaking of yr request list, i have that look back in anger caprice record uploaded here:

unless you're looking for the real thing, of course.

also, i have the entire opera de nuit discography (two singles + 1 lp, i believe) on my computer, will post on them soon, if you're interested!

Very interested in the Opéra De Nuit. Never heard them but I'm curious.
About Look Back In Anger: it's the Caprice/Mannequin 7" I'm looking for. Posted the mini-album (with Flowers 12") myself sometime last year.

This was a good album, but.... the music could have definitely used a little more variation. Almost every track sounded just like the one before. This band definitely could play, but needed to break from the monotone. I heard about two different sounds in the whole 13 tracks.

Great stuff. Really like that circuitous guitar. Would love to hear more by this band.

this is fantastic and has been on heavy rotation ever since downloading it. thank you very much.

Does anyone have a lyric sheet that they could scan? Or if any one of you know the lyrics please post them!

Much appreciated, awesome album, thanks for the upload.

I believe this download is not working properly. If you would repost it I would appreciate it.
I love this blog and thank you very much for putting the time and effort in.

Yes you're right. Seems it would take more than 6 hours. I'll re-up soon!

Thanks! Nearly impossible to find.

Hello Flo, great page you made and good news you bring. I'm in contact with Philippe as well :)

Reminds me a lot of Psychocandy era Jesus & Mary Chain

It's not really certain, but the release should take out in November on the Infrastition Label(Maybe you know ;))! And I put an interview for Photodrame K7 from Espoirs Ephémères fanzine (in french only:/) in pictures of the myspace page. Have a good Evening!

It's a temporary problem. Check back a bit later.

I'm really liking this a lot. Thank you for introducing me to this band.

having quite a few issues getting this to unarchive

hey curious guy,
do you have an email i can reach you at? looks like a friend of mine is planning a reissue of this record and is looking for high quality .wav files of this album. would you be able to supply them? i have a copy of the record sitting here myself, but it's got a bunch of crackle and pop on it!

let me know how to get in touch, or you can contact me at thespanglemaker@gmail.com. hope you can help!

if anyone's interested, there's a copy for sale on discogs:

I removed the link. People should buy a copy!