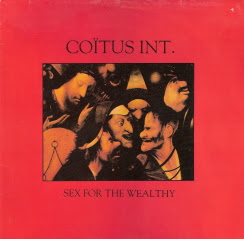 Another excellent postpunk release from The Netherlands. Coïtus Int. Started in the late 70's and their first release from 1980 is the 'Dead Excitement' 7" which is full on punk. you can get that one on No Longer Forgotten Music with some other Dutch punk records.
In 1981 their self-titled debut album showed a different sound. More influenced by Joy Division. Read about it on Life On The Dot where you can download the album as well.
'Sex For The Wealthy' follows in the same style and was released in 1985 according to Discogs but my record doesn't mention a year of release. I really don't know if this is their second album as there is another one 'How To Make Love And Babies'. I searched for more info and some site states 1983, another 1991 as year of release.
Anyway, enjoy Coïtus Int., a band forgotten by many which shouldn't be. 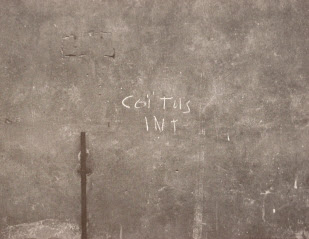 And thanks for this as well (as Party Day). Liked the 1982 release and looking forward to hearing this one.

our beloved curious guy-
forgive my intimacy- it's been a long time since i wanted to write to you but there were no words i could find for your blog...
i am so honoured that i came across it...most of the bands were unknown to me and thanx to you and also your friends...(cactus...the thing on the doorstep...only in it for the music...life on the dot...)
i had the chance to listen to these kinds of music....-poetic in my ears...
what can i say about soul merchants, cultural decay, all the bands from belgium...anorexic dread...and so many others..
i have already bought some cds...
in the short future i want to upload some very rear ripped lps...like uv pop...in your blog..if you are interested of course..
it would be my honour...

thanx so much for all this great thing you are into....
true love from Greece

Eleni,
thanks alot for your kind words. Well I would be very pleased if you could send me some UV Pop. I just can't afford those rare records as these are too pricey for me.
If you want to contact me directly, write to:
heretix99(at)hotmail(dot)com
Hope to hear from you.

I heard about this band but never heard their music. I can now !
Thanks, it's rather good.

Hello! I was wondering if there was any way you might be able to re-upload this album? Thank you so much!

can you please repost this LP?

Thank you very much
Efstathiou Stathis

Thank you very much

Any chance of a re-upload?