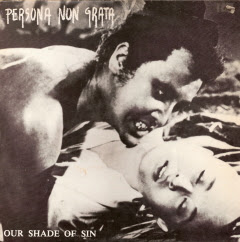 Here's another request.
Persona Non Grata was one of the many cold wave bands from France. I guess they were from Rouen as one track appears on the 'Rock à Rouen' comp. album.
This mini album was released on cult label L'Invitation Au Suicide. Includes a fold-out lyric sheet (my copy hasn't one).
Has some great tracks although you need to get used to the 'frenglish' accent in the vocals.

This is the last post for this year. Wish you all the best for 2008.

Hi Many thanks for all the great post . It always a real pleasure to check your blog. I really like l'invitation au suicide release , do you hav by chance the corvairs?
Greetings...
pokemi

I just want to say thanks for all your posts in this year - I enjoyed them pretty much. Good luck for 2008!

great stuff again. somehow this record got lost along the way - i don't know what happened to my copy of it - i used to play "iroqouis hound boys" every once in a while when i was djing in 86 or 87 or so, probably forgot it in some fucked up club... it's so great to hear this lost gem again. you just manage to surprise me with almost every post.
thank you so much + please please please keep on keeping on!!!
happy 2008!

Thanks everyone!
Pokemi, can't help you with The Corvairs.
Roman Empire, I'm also looking for the 2nd album of Schleimer K. Only have the first one.

mutant-sounds.blogspot.com has the first album by schleimer k and a 12" too!
They announced the second album to be posted soon, but that was in july 07. maybe they forgot about it :(
anyways, thank you for the music and see you all in 08!

Hey, thanks for this. Hadn't heard it in years. And thanks for all you do here. It's a wonderful thing. Happy New year and all the best in 2008.

Thank you for honoring my request. Best wishes to you in 2008!

Thank you, loving this.

Give me new link please, this is don't work.

Thank you very much!