Thanks alot to Eleni from Greece for donating these rare records.
UV Pop is actually the alter ego of John K. White. Before UV Pop he was in The I Scream Brothers who have a few cuts on compilations.
The first UV Pop release is the 'No Songs Tomorrow' 7" on PAX, one of the rarest of his releases. Next is the 'No Songs Tomorrow' LP on UK experimental label Flowmotion (Konstruktivits, Metamorphosis,...). This album gave UV Pop a cult status. This album was also issued in Belgium on Konnexion. Also on Flowmotion appeared the 'Anyone To Me' 7"/12".
The 'Bendy Baby Man' is the second full length of UV Pop, who became a full band now. This one was released on his own Extra Records label. On this label came also the very last release 'Music To Yeah To' 12".
The 'Serious' 12" was released on Native Records and offers two different versions of the track that appears on the 'Bendy Baby Man' LP.
This is really good stuff but unfortunately very rare or way too expensive to get my hands on. UV Pop have a cult following, so maybe it's time for some reissues.
Get more info on UV Pop on this German fansite.
Anyone who could provide more UV Pop releases, please do not hesitate to do so.
Ripped at bitrate 256 including scans of front and back sleeve. Thanks Eleni! 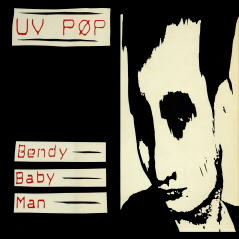 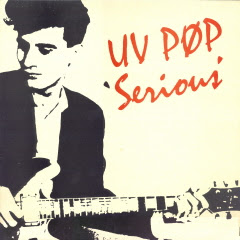 hi phoenix, thanx for posting this !!!
actually I have "no songs tomorrow
on lp" but i don't know anybody
with a record player,
also would you be interested
in rips of the rare clock dva 12"
passion still aflame and high holy disco mass, sorry no artwork, just the music, where in belgium are you located, do you happen to live in kortrijk :-) ?

yep big thanks to Eleni and CG.

thank you very much.

Thx a lot for posting this great record! I didn't know the band.

It sounds like The Smiths (the guitar!) and the voice reminds me of Micheal Stipe.

Hello Phoenix/Curious Guy and Thank You very much for these UV Pop posts, I've so much appreciated!! They are GREAT and so Rare!

At this purpose, You meant in Your post that the shared releases haves their own covers, but that's not...

Googling the Web I found some covers, but nothing about the scans of the EP Serious. Would You like/You can send them to my mail-box, please? ginzbrettion >< gmail.com (replace " >< " with "at" of course)

Thank You very much.
Ginz77

Thank you curious Guy and Eleni for these. I was totally unaware of this band until I found them here. The link for the album works fine, but the 'Serious' 12" link seems to have died. Could you possibly post a new link? I am sooo impressed by your blog that I cannot find the words to do my appreciation justice. Thank you, so much! PS. I saw your entry re. your dog, Big Ears. So poignant; it had made me think of the mortality of our Dalmation 'Peig' who is now over 12 years old. Respect, Mike (Ireland).

Hello Mike and thanks a lot for the appreciation.
I'll re-up tomorrow or this weekend if that's OK for you. Don't have much time now.
Enjoy the tunes and love your dog! (btw, there's a new one in the house already for 2 years. Also from the animal shelter).

New link is up Mike. Enjoy!

Hi,
It's great to see people are interested in our old stuff and we're very pleased to hear all of your nice comments.
I will try and answer some of your queries here- if that's ok-
First of all though- the album- No songs Tomorow is just being re-released- on vinyl and CD in the states but should be available as a download shortly after- no release dates yet as it's still being digitized even as I type.
There's a new ep out- with 3 new tracks and a contemporary version of Serious- this will be available on i-tunes shortly.
So on to your questions- We have the 12" version of Anyone for me- as far as I can see it's not available anywhere yet- but if you e-mail us at- uvpop@tiscali.co.uk I am sure something can be sorted out.
You seem to have the Serious front/back images sorted but we have a FB and myspace site- with all our artwork up- or being uploaded soon.
We reformed the band and are currently performing gigs around England- the first album though is going to be performed by just John White (Vox Gtrs),Fiona Sergison (b/vox) and Tony Nicholson (on keys and bass). For a limited time to commemorate the re-launch.
Any queries direct them to our myspace site or e-mail John at the e-mail adress given above.

our myspace adress- www.myspace.com/uvpop1
Once again- thanks for your interest and all your kind words.
cheers.. uv pop

Hello John, thanks for the comment. I'm in contact with the person doing the reissue. Looking forward to it! UV Pop originals go for way too much money these days. When the reissue is out, I'll make an entry here to promote it.

The news is that we're on line- live on Friday night (1st Oct 2010)and we'll be playing accoustic versions of songs, talking about what we're up to and playing tracks from our back catalogue and favourite artists.
The link is here-
http://www.sinefm.com/listen_live

If anyone is interested- a CD compilation of obscure UV POP tracks is being put together.
Some stuff that was never released, some stuff that was but is hard to get.
If anyone is interested- we're inviting suggestions for tracks - just post your suggestions or if you just want details of when, where and how much, here- UVPOP@hotmail.co.uk
Thanks for your interest guys