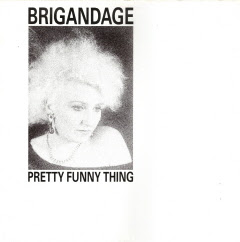 Another request by English Paul.
Here's the one and only vinyl release of Brigandage. Brigandage started in 1982 in London as 'the next Sex Pistols'. The band got thrown in with the posi-punk scene although musically, their roots go back to 77 punk. Line-up was constantly changing although Michelle and Richard North were steady members. Some ex-members went on to play with Christian Death, Altered States and Daisy Chainsaw.
I must admit that, after hearing their contribution to the 'The Whip' comp., I was a little disappointed. But the record started to grow on me after a few listens. Their comp. track is probably the best Brigandage ever did.
Before this album, Brigandage released the 'FYM' tape on their own Fuck Off Records.

Could You Walk On The Waters LP 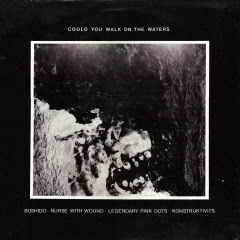 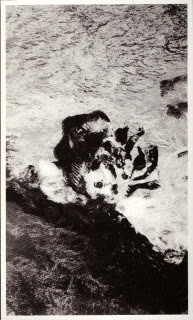 Cranio at The Thing On The Doorstep and I agreed to post almost simultaneously 2 comp. LP's on Third Mind. Cranio posted the 2nd vinyl comp. called 'Life At The Top', an essential who-is-who of the mid-80's experimental scene.
Here's the 1st vinyl comp. 'Could You Walk On The Waters'.
Bushido is no one else but Gary Levermore, owner of Third Mind Records. Bushido offers 3 tracks of experimental synth sounds. Up next is Nurse With Wound with a lengthy track. Don't know if this track has been released elsewhere. The Legendary Pink Dots need no introduction. They offer an extended version of a track from 'The Tower' LP. Last one is Konstruktivists, here appearing as Konstruktivits. Glenn M. Wallis is the man behind the name and offers 2 dark, experimental soundscapes.
Cover art by Babs Santini.

V/A Could You Walk On The Waters LP (Third Mind Records-TMLP 09-1985)
1. Bushido - Somebody Up There Likes Me
2. Bushido - Sayonara
3. Bushido - I Like The Way You Said That
4. Nurse With Wound - The Dance Of Fools
5. The Legendary Pink Dots - A Lust For Powder (Version Apocalypse)
6. Konstruktivits - Tears
7. Konstruktivits - Smack

Could You Walk On The Waters

Marc Riley With The Creepers - Gross Out LP 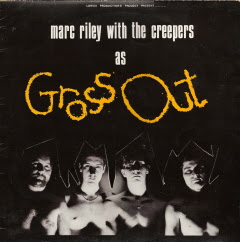 Here's the first album of ex-The Fall member Marc Riley with his Creepers.
All tracks recorded with the Creepers except 4 & 7 which have the same line-up of the 'Favourite Sister' 7" (see previous post).
'Snipe' was recorded at the In Tape mansion and is a very lo-fi recording. A better version can be heard on the 'Shadow Figure' 12". 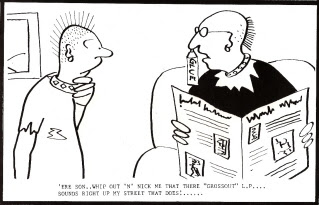 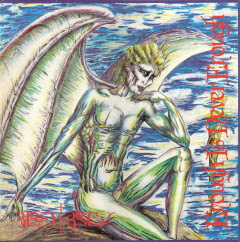 I think I'll make some people happy with this post.
Blood & Roses were from London. Bob Short, guitarplayer of the band, was a member of the Kill Your Pet Puppy collective, together with Dave Roberts of the Sex Gang Children. Bob Short was also very interested in the works of Aleister Crowley.
'Assault On Precinct 13' is a cover of the soundtrack from the same movie of John Carpenter.
Other releases of Blood & Roses are:
(Some) Like It Hot 7"/12"
Love Under Will 12"
Life After Death MC

Check the band on the Deathrock site. 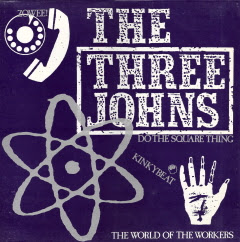 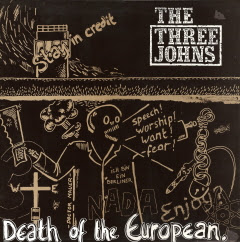 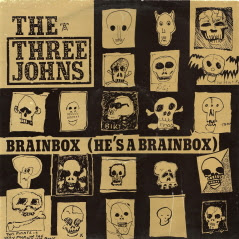 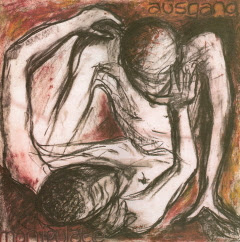 Here's another lesser known goth band although Ausgang gets more recognition these days. The band even resurrected in 2001. Originally formed in 1982 as Kabuki (one 7" release), the band released two 12"s and one 7" on Criminal Damage Records. As the label folded, Ausgang got signed to FM Records, a metal label. One 12", 'Hunt Ya Down' and this LP was released on this label, that didn't know how to market the band. Ausgang became Ausgang A-Go-Go and released another 12" and mini album on their own Shakedown label.
Ausgang are a great postpunk band with Stooges and Birthday Party influences.
There is an anthology CD available on Anagram but almost half of the tracks of the 'Manipulate' LP were omitted. The album came with a booklet but my copy is missing this gem.
Official site of Ausgang here.

Five Go Down To The Sea ? 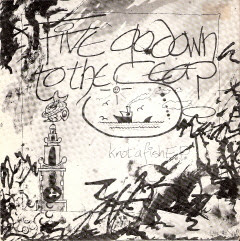 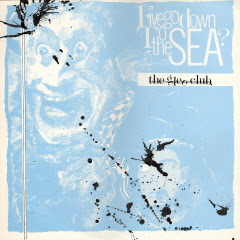 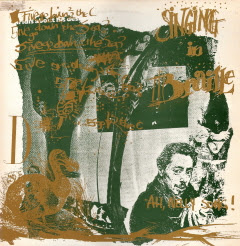 Every time I look for more information on Five Go Down To The Sea ?, all I get is info from an Enid Blyton book which also appeared on BBC in the Famous Five series. The band probably took their name from it.
Some years ago I read on a forum that the guitarplayer passed away after the band split up.
You could already hear a song of them on the 'Good Morning Mr. Presley' comp. LP I posted not a long time ago.
For those who like The Fall, The Three Johns, Membranes, Bogshed,...

No Trend - A Dozen Dead Roses 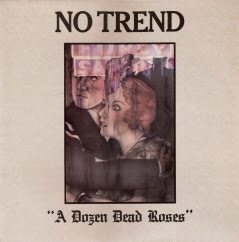 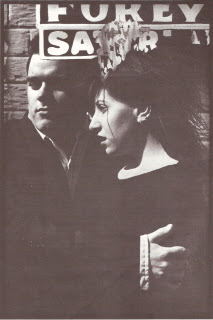 Slobodan wants, Slobodan gets.
Here's the second album of No Trend. Don't expect a 'Too Many Humans' part 2 here. The line-up changed drastically, so did the sound a bit. Where the first album was more of an attack on human social behaviour, this album deals more with love and relationships, again with a good dose of negativity.
4 tracks were co-written with Lydia Lunch (tracks 2,3,8 & 10) and were also seperately released on the 'Heart Of Darkness' 10". 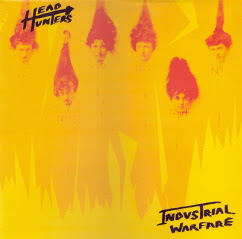 Bored of listening to your early Killing Joke LP's over and over again? Well here's an alternative.
Headhunters were from London and this is the only full length the band ever released. Again not a lot to be found on Headhunters.
Shout Records is an interesting label that also released records by Peyr, Hack Hack and Wicked Kitchen Staff.
Here's a discography:
Wipe Out The Funk 12" (Shout Records)
Industrial Warfare LP (Shout Records)
Impossible 7" (Shout Records)
Way Of The South 12" (Quiet Records) 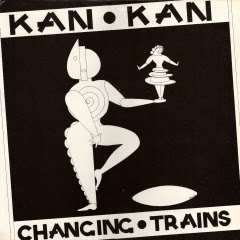 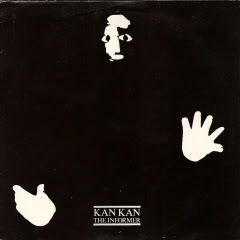 The Mutant Sounds blog posted the East Of Croydon comp. LP recently and it has a great track of Kan Kan. This prompted me to post their output.
Not a lot of info to be found on the band but Kan Kan was the brainchild of Patrick Dineen. The band also recorded a Peel Session in 1982, with 4 tracks not issued till today.
The 7" was self released and probably has no picture sleeve; my copy doesn't have one.
Anyone with more info, please post it in the comments section.

Bogshed - Step On It LP 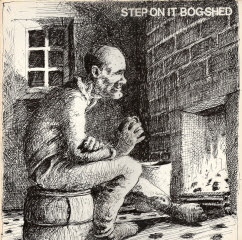 Here's the first album of Bogshed. Text below taken from their site which you can find here.
Bogshed formed in Hebden Bridge, Yorkshire, England in 1985, initially as The Amazing Roy North Penis Band, and comprised Phil Hartley (vocals), Mike Bryson (bass), Mark McQuaid (guitar) and Tristan King (drums).
The Membranes' John Robb signed them up to his 'Vinyl Drip' label, releasing the classic debut EP 'Let Them Eat Bogshed', before they moved on to Shelfish Records.
Championed by John Peel, they recorded 5 sessions for his radio show between 1985 and 1987, and gained regular airplay. The uncompromising mix of angular guitar-led tunes and Hartley's energetic vocals (his stated aim was to sing like Doris Day!) meant that Peel's listeners either loved Bogshed or found them unpalatable. After 2 superb LPs and a string of great singles, Bogshed called it a day, the last single ("Stop Revolving") never making it out of the warehouse.
Hartley popped up late in 1988 with a solo Peel Session, but no releases were forthcoming. King went on to play with Jackdaw With Crowbar and later A Witness, while Mike Bryson, who was responsible for the sleeve artwork is now the world's foremost cartoonist/illustrator.
Step On It LP (Shelfish Records-Shelf 2-1986)
1. Mechanical Nun
2. Run To The Temple
3. Adventure Of Dog
4. Tommy Steele Record
5. Jobless Youngsters
6. Tried To Hide But Forced To Howl
7. Packed Lunch To School
8. Summer In My Lunchtime
9. The Fastest Legs
10. Oily Stack
11. Hell Bent On Death
12. Thunderballs
13. Can't Be Beat
14. Little Car

Release The Bats - Ever Pleasant Smile 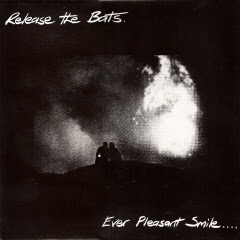 Well I've seen someone on the Deathrock Forum asking for this album, so I decided to post it here.
Release The Bats were a goth band from Bolton. Don't know much more but they released a 7" in 1985 with 2 tracks: 'Unacceptable Behaviour' and 'Harsh'. Both tracks can be found on the LP.
I won't say that this album is classic stuff but it's damn rare and worth a listen. I was lucky to find this one through a German punk mailorder that found some stock copies of records on First Floor and selled them quite cheap (I was also able to replace my worn copy of the Saigon LP).
For those who don't know, First Floor was a sublabel of the infamous Rock-O-Rama. This label started as a punklabel, releasing German punk and also licensed records off of Propaganda Records from Finland so that people had easier access to those classic Finnish hardcore punk records. But later the label also released records by Skrewdriver and other RAC/WP bands. Rock-O-Rama ceased all activity in the 90's after the police raided their office.
I don't think that bands like Release The Bats, Saigon and They Must Be Russians were aware of the connection; or maybe they didn't care?

Release The Bats
Posted by Curious Guy at 4:36 PM 7 comments:

The Loved One - Locate And Cement LP 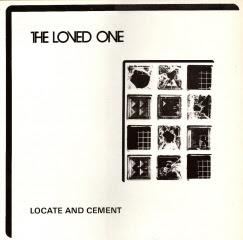 Don't know a lot of The Loved One. First heard them on the 'Life At The Top' comp. LP on Third Mind.
Band members are Dryden Hawkins and Zeb Yek.
It's a great album of experimental music from the early 80's, but not a lot of people seem to know The Loved One. 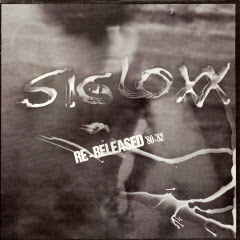 Request by Julio.
Siglo XX were a Belgian band that started in the midst of the punk explosion. Being from Genk, Limburg, a region that suffered from the closing of the coal mines and mass unemployment, bands like Siglo XX, De Brassers and Struggler created a darker sound. They kept their punk spirit by releasing their recordings by themselves.
Siglo XX were influenced by Joy Division, but hated being called cold wave.They never cared about trends or what was fashionable.
Siglo XX existed until the late 80's and still have dedicated fans all over the world.
The band name is Spanish for 20th century and was taken from a Spanish anarchist movement.
In their own words: "We are marginals, but to us marginality is change, change is movement, and movement is life. The established is halted, gray and dead".
Tracks 1-3-8: 'The Naked And The Death' 7" 1980
Tracks 5-6-10-11: 'Straatlawaai' tape 1981 (has 9 tracks)
Tracks 2-4-7-9: 's/t (1st)' 12" 1982