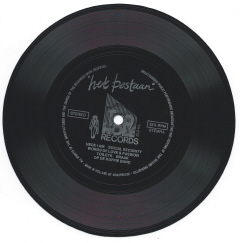 My eternal gratitude to bX-59cppw for sending me this flexi. Never thought I would find a copy of this one.
This flexi was a freebie that came with 'Het Bestaan' (Existence) magazine. Never seen that magazine but from what I know it was art-orientated.
First band is Social Security. Quite wellknown locally. They released a few albums and singles before on major label Epic and VIP Records. Their contribution was already released as a 7". Maybe it's a different recording?
Next is Toilets, the reason why I was looking for this record. All their records have been posted on the blog before. They deliver an exclusive track.
Third and last is the Op De Koffie Band. They were from Leeuwarden and existed from 1980 and disbanded in 1986. They shortened their name to De Koffie Band later. They play a kind of jazz funk with a weird twist, with Dutch lyrics. Released a 7" and a 12" before. Gerard Groenewoud and Tilly Bui are an arts duo now, working as sculptors.
Tried my best cleaning up the flexi noise but don't expect CD-quality. This is a 1-sided flexi with 7 minutes of music on it.