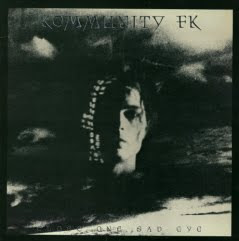 Close One Sad Eye
Posted by Curious Guy at 10:54 AM

Great to have a better quality version of this, but IMHO it still remains the weakest of all their albums, the brilliance of "Something Inside Me has Died" notwithstanding, and probably explaining why, unlike "Vision and the Voice" it remains in re-release limbo.
A much better bet for this period of the band is the download-only Kommunity FX: Live at The Krypt album.

DL'd happily- Much thanks!!!

True, not everything on this album is outstanding. But "Something Inside Me Has Died", "The Other World" and "Junkies" are. And the rest is still *great*. This record has always been one of my favourites.

that's interesting. for me, a teenager in the 80s, close one sad eye will always be THE GREAT KFK album. in any case, thanks again curious guy!

Great Post! I have this on CD…the cleopatra release but i will probably download anyways. vinyl quality is always better. I would also recommend the Live at the Krypt album if your interested in their earlier material. KFK plays show from time to time however their sound is more industrial. Most goths and deathrockers are praying for them to do an entire set of this album with a full band.

Thanks for the appreciation.

great blog !
If anyone is looking for vinyl copies of the records posted here,I have a helluva lot of 'em available on my website:
http://www.retrovinyl.co.uk

Noob is a pretty sweet song.

Thanks, I will check this out, was about to launch into this as one of my LP restores, but maybe this will save me some time, my LP of this was not in the greatest shape...

So, Curious, I have to ask, as a noob to your nice niche here did you take your name from LPD song of the same title (one of my all time faves)

Maybe some of my details LP restores would be of interest, maybe we should crosslink?

Yes I took my name from the LPD song. Don't follow them these days anymore. Very much into The Maria Dimension.
If you think you can add some interesting records, feel free to contact me at: heretix99@hotmail.com