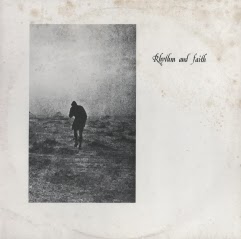 Not a great service to the Rhythm & Faith memory this post...behind this record there were the dreams of some guys, originally too far from the wave empire...maybe this record is not the best, but think to the urges of the discographic, the bands were often under the shoes of the discographics (they've changed a lot of very good styles, only to produce their ideas of 'musical product')..anyway, the Style Sindrome production is great, they weren't able to make records only for the old same italian problems: no space for alternative rock, only 'canzonette' ! the Cd collection made in 2012 is fantastic !

Hi Grucio, just to let you know that I like this 12". It's the obvious Siouxsie influence that probably made it difficult to get more recognition, especially in the UK where female fronted postpunk bands were easily tagged as such.

thank you so much.have a nice Sunday

The female vocalist of this band were killed into the heart by the same recurring verdict ('siouxsie like'), during her whole career (and she started to sing in '79 with the Style Sindrome, before as T.M. spa), the only sentence was to have a very similar voice, the wave way to sing was the same for all the female vocalist...this is my opinion. Anyway thanks to share this work. Style Sindrome are back on stage (making 'covers' of the R.& F. too): http://www.stylesindrome.it/ ciao

I quite enjoyed this one. Thank you for the 320.