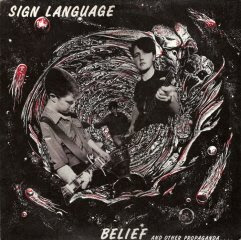 Cool indie/postpunk from this Blackpool band Sign Language. This 12" was their only release and an early one on Fire Records. There's another song 'The Killing' that appears on the 2nd 'Blackpool Rox' comp. 7" issued on Vinyl Drip Records. I'll post that one in the future.
Sign Language formed in 1981 as a punkband but moved more to a new wave/postpunk sound over the years.
The band has reformed and occasionally do some low-key gigs.

They actually self released a tape with about a dozen tracks on it as well. Still playing gigs in Blackpool from time to time.

Would be great to hear that tape. Didn't know that.

Hi Curious, thanks for the link, much appreciated.

I'll try and dig out the tape if I can find it, and upload some of the tracks if anyone's interested.

You can find some recent live footage on Marks page here.

Hello Laurence,
thank you for leaving a comment. I'm definitely interested in hearing that tape.
All the best,
CG.

this album is absolutely fantastic!!!
ad my name on the list to hear the lost tape!!

Cool story you got here. It would be great to read something more about this theme.
By the way look at the design I've made myself Overnight escort

Ahh. Another reup request! On a journey on last.fm...

Cancel that one, found it here: