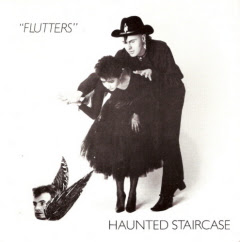 Another obscure gem from the UK. Don't know when this 7" was released but I guess mid-80's.
Haunted Staircase claim this single as a homage to Hitchcock as they use the cut-up technique used by Hitchcock in his films.
They also wanted to create a new kind of love song as well as a new kind of dance music. There's a manifesto that accompanies this 7" which I scanned and included in the file.
Actually it's quite nice synthpop with a cabaret-like feel.

Thanks for posting this. It was interesting, odd but enjoyably so.

mescalito said...
This comment has been removed by the author.
10:50 PM

It was released in 1981. I guess that make this release even more interesting