The Poors Of Reign - Cherish/Ordinary 7" 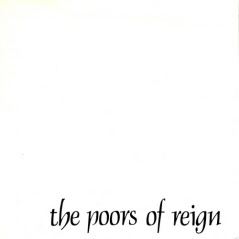 Very first release of this Manchester postpunk/indie band.
Can't find a lot of info on the net. Seems that they were active until the early 90's with other records released that I never heard (as Poors Of Reign). This includes the 'Plenty' mini-album, 'Soundtrack Of The Film' 12", 'Weird Scenes Inside The Cyprus' 12" and the 'Wrecked' LP.
I like this one 'cos it has a bit of Echo & The Bunnymen in the sound.
Chris Yates (trumpet & vocals) is now a painter and part of the Stuckist movement. He also did the cover artwork of all their records (except this one I guess).

The Poors Of Reign
Posted by Curious Guy at 12:41 PM

Hi there! How you doing?
I've been following your brilliant blog for quite some time now and was wondering, as last resource, if you, by any chance, have any recordings by Rain Culture, which appear on the b-side of "La Cassette Froide", a tape that also sees tracks by Little Nemo on the a-side. Actually, I'm looking precisely for those tracks but any other available would be appreciated.
Thank you so much for your attention and trouble.
Best regards

Sorry can't help you with Rain Culture. Maybe try Dreams And Voices as this blog is more specialised in French stuff than me.
Thanks for the appreciation.

Just posted one your readers may like...http://penmallet.blogspot.com/

Great Stuff! I owned this 7" back in the days and almost forgot about it.
Thanks for bringing this back to mind!
Love Your Blog!!!

I guess I'm not the only one, but I totally love your blog.

This is refering to a pretty old post, but I wanted to know if you've ever found any pictures of The Children's Hour? Ever since you posted about them I can't stop listening, they're great.

Thanks for all the great tunes!
Cheers!

Hey there!
Thanks for the link :-)
Will surely have a look there!
Best regards

Good luck Voces Distantes!
Roman Empire, thanks for the comment. It's been awhile.
Wm, I think that you can find sleeve images on discogs and/or rateyourmusic. Children's Hour was a fine discovery for myself too.

Hi. As a some time member of the Poors of Reign back in the distant past I'd like to thank you for your good words.
KM

I remember that my father used to listening this music he had a lot of fun when he listened it and when he die I found those Cd and completely it is nice music to my ears.Generic Viagra Buy Viagra