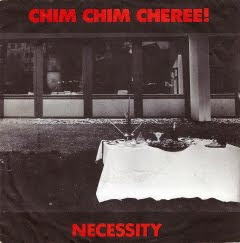 One of those enigmatic bands that appear on the Godfathers Of German Gothic comp. CD. Don't own that CD but it's a good reference to search for more on those bands.
Chim Chim Cheree! were from Düsseldorf and did only this release I guess. Not that goth or dark as you would expect but a fine listen.

Willing to march into hell for a heavenly cause!

Fritz die Spinne said...
This comment has been removed by the author.
9:26 AM

The GOGG track is "Remember the Rain," and while it does not stand out well as a Gothic track, it is enjoyable. Another track, "Too Much Too Soon appears on the 1983 sampler "Pesthauch des Dschungels" which I find here: (http://saatjohann.blogspot.com/2009/02/va-pesthauch-des-dschungels-lp.html)

I wonder how many bands are out there whose names really make for a difficult time weeding thru data to find information. This one was among the worst, along with the amazing band Also. (http://www.discogs.com/artist/Also)

There is also a 12" called "Serenade" with three songs on it. Chim Chim Cheree later became Die Fische and released an Album called "Eine Nacht in Kairo".

Awesome!!! Thanks so much, and, hope you're well!

Shared with pleasure!
Thanks for the extra info on the band, sam.hain.

any leads on those german gothic comps?

They are quite rare now ... The series was generally under the moniker 'Ghostriders Of German Gothic' and variations on that theme. They are pretty comprehensive in selection, and some of the bands are definitely weirdly out of place, and there are other notable omissions e.g. Happy Straps.

I think there was 1 Ghostriders comp, but I definately have 3 Godfathers CD's--I needed to replace one and found all three on eBay for $10.00 in the bargain. Shall rip them soon.

There were also these "German Mystic" samplers with various volumes. I have two of them--either #1 or #2 and #3.

Tonite or tomorrow I'll be posting the 12" and sampler trax of CCC, as well as some related bands with Joost as singer.

@Fritz. Let us know when you get those up. Thanks!

thank you!
i'm very grateful that you share your knowledge of these band with us, as well as the recordings. This blog is really a model for how it should be done.
wm

can you reup this disc pleace D: