Phantom Limb - Dance Of The Guilty 12" 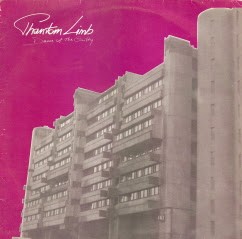 Sole release of this unknown but quite interesting band. Phantom Limb were from Oostende, Belgium although sometimes mistaken for a Dutch band as the record was released on Sublabel, a sublabel of Torso Records.
5 tracks of excellent cold wave typical of the era, of which 'Numbered Hills' is an instrumental. Hard to find or quite expensive but once in a while there pops up a copy over here for a decent price.
As far as I know there were only 2 releases on Sublabel, this one and the Neon 'A Day In The Land Of Lost Horizons' 12".

Amazing. Thank you. I think it's extra-special that you all check each other's posts often so that we are always getting something fresh!

hey CG... i had a couple requests that you may or may not have but i would like to hear again... uk subs killing time lp. ramblin' jeffery lee. you have these?

Jordan, I always check some blogs to find music I don't have myself. Sometimes we 'beat' eachother on our posts but that's no problem. It's all about sharing.
TJS, can't help you with the requests.

Thanks for keeping surprising me!!

CG do you have the factory - hold out 12"? That's another rare one at least to me, can't find the original anywhere, or any info about it at all.

A good rip of yours as usual, that would make my day until I locate the real thing.

By the way, would you accept a want list of original vinyl I'm after? You seem able to locate impossible records, so maybe you could give me a hand when you go around to get your stuff? If you find it appropriate we could exchange emails.

Nico,
don't have that Factory 12". I'll be on the lookout.
Don't know if I can help you out with records you're looking for. It's getting more difficult these days to find rare 80's records for a decent price. You can always send a list to
heretix99(at)hotmail(dot)com.

i just thought i would say that 'deep in mines' is now my #2 track on itunes.

Hey Jordan, glad to hear you like Phantom Limb.

There is also a 12" by The Bugs called Emotion on Sublabel/Torso, released in 1982

I love 'Phantom Limb.' It took a few listens, but this album grew on me a lot. I love 'Dance of the Guilty,' I am going to spin it while DJing. Thank you!

I have this on tape, a guy from school gave it to me in the eighties. But the quality is not that good any more, and my tape-recorder broke down a few years ago.
Nice to hear this again, thanks a lot !