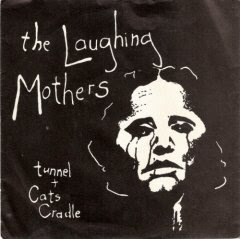 Here's another obscure one. The Laughing Mothers were a UK postpunk band. Don't know exactly from where in the UK. They don't like to be called goth although they appear in Mick Mercer's Gothic History book.
Another track appeared on 'The Timebox' comp. album which also featured The Fifteenth, Thatcher On Acid, Blyth Power, ... The Timebox seemed to be a venue in London back in the day.

They have a Myspace page here. There are some unreleased songs you can listen to.

IMPORTANT!! the tracks are labelled incorrectly. Seems that the labels were printed in reverse. So 'Tunnel' should be 'Cats Cradle' and vice versa. Thanks to Robertzombie for pointing that out.

Laughing Mothers
Posted by Curious Guy at 10:15 AM

I have that Timebox comp. Will rip it when I get around to everythiing else!

Yeah the Timebox was at the Bull & Gate pub right next to the Town & Country Club (now The Forum) in Kentish Town. It was run by John "Fat" Beast. There was also a Timebox 2 in South London for a while....

Have that single, not listened to in years. great to hear it again. Thanks very much :)

Sheerinertia said...
This comment has been removed by the author.
7:28 PM

Hello Hairpins and Fritz! Stopped in to say hello because I don't often enough- just wanted to let you know that I uploaded a 1984 bootleg of Zero LeCreche live today and I know you'd be interested- sent to me by an anonymous poster- the sound quality is awesome to say the least- check it out!

This is brilliant! Thanks so much!

On their Myspace the track "Cats Cradle" is what you've labelled "Tunnel" (with the Alice like drum intro).

Listening to the words I think you're right. The labels on the 7" are reversed then! So 'Tunnel' should be 'Cats Cradle' and vice versa.

Hi guys , I'm looking for The Three Johns - 'The Death Of Everything' link , can you help me ? Thanks anyway

thanks for The cravats single(yes,still work )
for download from myspace

The Laughing Mothers were from Corby in Northamptonshire.

this band is very good!

Hi im the guitarist from the laughing mothers, we where from humble Corby, there may be a Cd of old demos coming out soon look out we will be back.

They were from corby,northants, Probably the last good band from corby`s vibrant early eighties scene, never topped the lost souls in my eyes, but so much better than the later eighties dross( dance bureau, play the joker & vanity kick etc). Never thought i`d see anything like this on a blogsite! my english teacher was the guitarists dad & he was amazed that a few people in his class bought the record, never mind that they played in london supporting the gun club!

Looking forward to hear that CD with demo recordings!

I stumbled on to The Laughing Mothers by accident on You Tube and had to hear more.

In my spare time I run an Internet Radio Station called ‘Ground Zero’ trying to keep great music like this alive.

'Cats Cradle' is on the current playlist.

Thanks for sharing this lost gem.