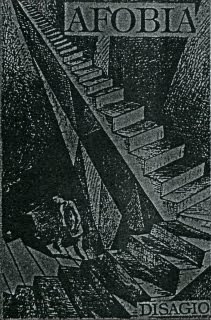 Here's another contribution by Rosario.
This tape was released in 1994 and Rosario knows some of the band members. He ripped this tape for a friend who is a DJ to use in his set. It took him quite some effort to get the sound better. He doesn't want his effort to be wasted so offers it to me to post here.
This cassette EP was released by the band. some members later in the more rock-oriented Frangar Non Flectar.
Good post-punk with influences from Joy Division, Killing Joke and Diaframma. Let us know what you think of it.

Afobia
Posted by Curious Guy at 11:58 AM

I think DJ is a professional terminology
What about IT ? sometimes I love it, sometimes I hate it. Music is more enjoyable with some substance that give a kind of cerebral relation. I was much more young when I listened that and this is a good memorabilia when I don't see people knowing nothing about it and coming on the street when you're with your girl-boyfriend to explain a kind of illusoire soap opera that is just the present and the reality of some radio stations in action

love it, just the kind of stuff I come to this blog for

A great thank from France for all this old stuff i've discovered or re-discovered thanx to you !!! Your blog is like a gold mine !!!! May i have a request : anything from POMPEII 99. Impossible to find it out through the last years. Greets

This is really exceptional stuff ; thank you. We have just rebooted blogspot : www.avicusuk.blogspot.com with some demos to download from Fashionable Living Death .. I think you will enjoy them. Keep it more regular this time, trade / swap maybe?

This Band Is Amazing, thank's