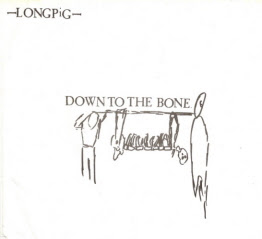 First release of this not-so-known goth band. Don't know why they are labelled as a goth band 'cos you can't compare Longpig to any other band from that time. The music isn't very uptempo and quite minimal. The vocals are also more like spoken word.
Longpig went on to release an album 'Of Love And Addiction' on Anagram and a 12" 'Why Do People Find Each Other Strange', a track from the album with on the other side the same 2 songs as on this 12" B-side, probably re-recorded.

One of the ex-members left a comment on one of the previous posts but I can't remember which one. I hope to get more info from him soon on this one.

I LIKE SO MUCH THIS RELEASE,THNX A LOT TO UP-LOAD.

THE FIRST SONG IS THE ONLY NEW SONG BECAUSE THE OTHER 2 SONGS ARE THE SAME B SIDES.

Great post ... no I agree that they aren't per se a goth band but I guess they had a different approach that was nonetheless artistic and had sufficient content to box them like that, considering the time. Strange little band but very pleasant.

Finally! What about the album? Any chance?

hi friend, i love your blog...
I would love you to visit my site...
greetings to mexico city....

Funny I never bothered to look up the band's discography. I'll post the album on my blog, http://fritzdiesspinne.blogspot.com

dear curious guy,
i hope things are settling down in yr new house. if u ever get a chance, i have a request. for awhile now i been trying to find viva los angeles 2. i've come across rainy day sponge's mirrored lost-in-thyme post on psych-up-my blog but the r-share links are morte. any chance? also, the 2nd fourwaycross album or the blue daisies wilt lp i'd love to hear. thanks. hope u dig yr new digs.

Thank you for this curious guy and have a good Christmas in your new house.

Thanks for the appreciation everyone.
Jovial, I'm in contact with Rainy Day Sponge so I can ask him for some links. I only have the V/A Viva Los Angeles 2.

I can recommend the Longpig album.

Here's some new stuff from aboombong...

yessss. the world needs viva los angeles 2 somewhere on the net. santa didn't deliver so hopefully u will when u find the time. i do know it's tall order, 2 lp's worth of music if aye aint mistaken, but its mostly good, topical bands, no? merry new year, this blog as always is tops

i forgot to mention that this is a really original & sweet record. wonder if their lp is as good. will hafta check it. thx again

IF YOU LIKE,I'LL SEND YOU THE LINK OF LONPIG(LP),AND IT'S MY DONATION FOR YOUR BLOG,DO YOU ACCEPT?...

I don't matter what you think in my opinion they are a really nice group and I feel great when I listen it.