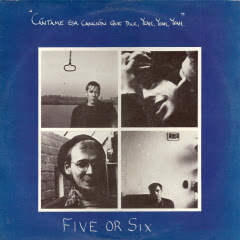 Five Or Six
Posted by Curious Guy at 2:44 PM

All the Trisomie 21 records I have are already posted. Don't have more, sorry.

five or six is great. it's a pity that cherry red holds the rights very tied and never any of this comes on CD - i know, i tried

Let's hope that Cherry Red does a proper reissue of Five Or Six in the future.

Jim, maybe I'll get more Trisomie 21 from someone else.

great stuff again. thanks a lot!

Hi, I just bought this very record this morning. Searching for some info, I reached this blog. Congrats, and read you from now on.

Hello, your blog is great. I really appreciate the amount of work you do to save these treasures from obscurity. I've a question: can you also post 'Polar Exposure' mini-lp and 'Another Reason' 7" and 'Four from Five or Six' 12" too? It'd would be great. Thanx for your amazing blog again.

Yes, I did find 'Polar Exposure' on your blog and on my PC as well. Stupid me. ;-) Do you have plans for putting 'Four From' up on your blog?

hmm, i just finished listening to this...is it possible that Death in Vegas stole the 'Another Reason' melody for their famous 'Dirge' song? it seems to me the resemblance is striking!

Just purchased "Acting On Impulse - The Best Of Five Or Six" CD. Released this year on CR, #CDMRED324. My first introduction and a good one!!

thank you for remenber this to me.

Could you consider doing me a massive favour & re-up this LP at some point? I'd really appreciate it, I've been listening to Five Or Six's other stuff an awful lot recently (was only familiar with "Portrait" for a LONG time) & this is the only thing I've not heard...

Hope you can help, & thanks!

I'll try to re-up this weekend. Maybe I'll re-rip the record if I can find it easily.

Cheers, would really appreciate it!