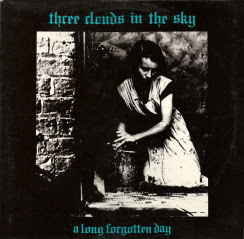 Three Clouds In The Sky
Posted by Curious Guy at 4:51 PM

three clouds in the sky later became the nightblooms, who released several records on UK labels

Wonderful album...just heard it and every song is adorable. Thanks for this and also The Underlings singles 12''s...Outstanding !

I uploaded the Ex / Alerta 12" a little while back, feel free to help yourself if you haven't already ;)

In Three Clouds, only Ton (gtr) had been in Alerta (where he'd played bass), although Harry (Alerta's guitarist) was one of the producers, and one of the lyrics was written by Albert, Alerta's singer.

After Three Clouds, Esther (vocals), Petra (bass)and Leon (drums) teamed up with Harry as guitarist in The Nightblooms. To call them a shoegazing band doesn't really do it: only the "Crystal Eyes" single really fits that bill and, although the 1st LP might've been a borderline case (if you abandon totally the idea of multi-layered guitars and effects being a shoegaze trait: on the Nightblooms debut LP there is only one guitar, no effects and no overdubs!), the second LP is certainly more like Queen than Chapterhouse.

Durutti, thanks for the Ex/Alerta post.
Thanks for the extra info Steve. Btw, bought this one a while ago from your mailorder ;)

Went to the link and was informed: Deleted or invalid file

New link for Three Clouds In The Sky. Enjoy!

can you please upload this one?