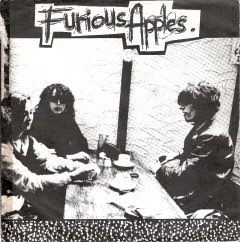 Here's the hard to find 7" of the Furious Apples. They were from Coventry and consisted of Gregory and Michael Crabb. Guess they are brothers.
They also appeared on the 'Something Stirs' comp. album.
And they also appear on a compilation that Nuzz recently posted on his blog. You can check it here.
This 7" was released on a small local label called Sonar Records. The other 2 releases I know of are 7"s of Armalite and Courtiers Of Fashion. Don't know if these are interesting.

looking forward to hearing it.

Greetings Curious Guy. I was interested in adding your blog to my music blogroll/directory @ http://music-bloggers.blogspot.com

I wanted to know if there is a specific category that you would prefer to be listed under though. If you don't mind, could you leave a comment on my blog and let me know?

Gregg Crabb and Michael Crabb are my two uncles. I used to hear stories about this band from my dad. I'l enjoy listening to this ep very much :)

Hi Elliot,
hope you enjoy the music you're uncles made back in the day.

I like them not only because they have excellent music but also because they're from Coventry one of the most beautiful England's places.