Vazz - Your Lungs And Your Tongues MLP 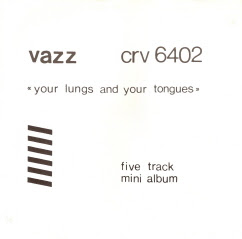 Vazz are one of those bands I always wanted to know more about. Stumbled on the Vazz MySpace a while ago and liked what I heard. Could finally manage to obtain the rare 'Your Lungs And Your Tongues' mini album from a nice Italian person (you know who you are!). To my surprise, I also got a message from Hugh Small with a link to the MySpace page which I forgot to bookmark and couldn't find again. I asked him if it's OK to post the album here and he doesn't mind. In fact he wants more people to know Vazz.
Vazz were Anna Howson (vocals) and Hugh Small (instruments) and were from Glasgow. They started in 1984, playing with bands from the Postcard scene although their sound as far off from bands like Orange Juice, Jozef K,... They were more inspired by the 4AD sound.
Robert King of Cathexis Recordings (formerly the Pleasantly Surprised tape label) was very interested in Vazz. All records were released on that label. First one is the 'Breath' 7" in 1986. Both tracks also appear on the mini album as the sound quality isn't so good on the 7" due to the length of the songs. After the mini album there were two 12"s released: the 'Feverpitch' 12" which is entirely vocals and guitar only, and the more uptempo 'Pearls' 12".
A final unreleased 7" single 'Everlasting' coupled with a dub version titled 'Neverlasting' was scheduled as CRV8406 but the Rough Trade UK distribution network folded in 1988 and the whole indie network collapsed ......... as did Vazz. Alot of indie labels collapsed in this period (Red Rhino, Ediesta,..) and marks the end of an era.
There's also a cassette called 'Whisper Not' which contains early demos. This was planned to be released as a 2x12" on Belgian label Les Disques De Crépuscule but never materialized unfortunately.
Well I hope you enjoy Vazz and I would like to thank Hugh for the extra info and support.
He's still busy with music as Reluctant Participant. Anna Howson moved to London in the late 80's and Hugh has lost contact with her since then.

NOTE: if any genuine person/label is interested in releasing a Vazz discography, please get in contact with Hugh. He would appreciate this alot.

Thanks for yet an another 80s obscurity. I'd be curious to hear Feverpitch one of these days if you have it.

I've got some Feverpitch MP3's from Hugh but I'll wait if I find a copy for myself.

I really enjoy this band. Never heard it before. Another cult one!
Thanks.

I would really like to say big thank you to Curious Guy for all his efforts and for providing us with all that cool music. Vazz are really cool and I'm looking forward to obtain their vinyls.

Well, I had just pulled out this LP copy for the next in line for my remastering project...this is a pretty good rip though, but I am going to see what I come up with.....thanks for the post...seems like every time I find something really rare someone else out there has already done the work....my LP copy did come with a limited edition print which I will post as well.