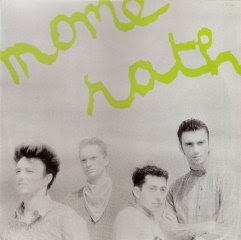 First album of this wave band from France. Mome Rath were from Paris and their 1st release is the 'Advising' 7" on Shin Produc. Then came a live tape on V.I.S.A./Androida Flux.
Mome Rath then signed to Garage Records and released the 'Sarasvati' LP and the 'Back In Paradise' 7" before splitting up.
Mome Rath comes from a nonsense poem 'Jabberwocky' written by Lewis Caroll as a part of his novel 'Through the looking-glass, and what Alice found there'.

Apratima
Posted by Curious Guy at 9:49 AM

thank you for this one, ive been looking for this for a long time, hope u can also feature a band called THIS SCARET TRAIN.....thanks

Always wanted to hear this one.
Thanks a lot!

Thank you sooo sooo much, been looking for ages with "Stranger" as my singular motivation. THANK YOU DEWD!

so nice ! Thank you - anybody have other releases from this band?
Anthony

Shared with pleasure. It's the only record I have of them. Contributions are welcome.

Hi, if you have a Torrent client you can download their two albums + many bonus tracks at http://www.btmon.com/Audio/Music/Mome_Rath_-_Apratima_bonus_tracks.torrent.html

Hello,
Thanks for this blog