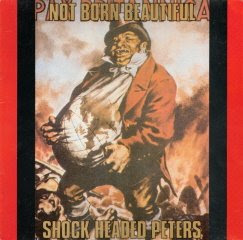 As requested awhile ago. My first post here were the first 2 12"s of Shock Headed Peters. This album was posted on Are Friends Electric but this blog is long gone. Here's your chance to grab this masterpiece again.
Shock Headed Peters was formed by Karl Blake after the split of Lemon Kittens. He released a solo album 'Prehensile Tales' and then formed Shock Headed Peters. Other members included Ashley Wales from Five Or Six and The Fast Set, and Mark Rowlatt of Metabolist. Also guest appearance of Crystalle Quim, nom de plume of Diana Rogerson.
A very diverse album, not really in common with the post-industrial scene showing Karl Blake's fascination of 70's hardrock but taking it to a whole new level.
One of the best albums released in the 80's. Too bad this hasn't been reissued, although there's a CD version as well but I don't know when it was released.

Not Born Beautiful
Posted by Curious Guy at 10:04 AM

Still on my toplist ! Thank you forsharing these gems !

sweet,
picked up blood brothers... 12" in a market in berlin. sweet song, looking forward to hearing an album.
Thanks

Oh, I forgot to add: a re-re-up on anything but DivShare. I received the message that "the file is unavailable in South East Asia" so that's no good for me... Cheers!

That would be awesome, dude!

I am SO glad I have both the LP & CD of this, I think it's their masterwork indeed! Any chance you have the first "Fear Engine" LP to post? How about KB's "The Imp of the Perverse" EP as The Underneath? Lastly, any chance you are one of those lucky few to have David Knight's "Rotator" CDR?

Thanks, you have a GREAT blog here!

z share is currently messed up. it won't let me download. do you have an alternate DL available? also, I sent the lemon kittens a review I wrote back in the early 80s, and they were kind enough to reply. danielle dax even sent me a little drawing. Karl blake is an unrecognized genius, in my opinion.

zshare is already a few days under maintenance. I really hope they fix their bugs very soon. Let me know which alternate you'd choose.

Thanks for the quick reply. I am not picky; whatever is best and easiest for you is ok with me.

I think the downloads work now. If not I'll re-up on another server.

Great. It was a search for Shock Headed Peters that brought me to your most excellent site over a year ago. Thanks for everything.

Karl Blake`s obsession with 70`s rock is not shown here as much as the next (harder) LP "Fear Engine". Instead, it is the dark lyrical and eclectic post-punk/art/ side that prevails in this LP. Original vinyl release includes the lyrics. As i don`t see it here, i` ll post it in my blog. -LFDJ

Great LP. Still got my copy stowed away somewhere but I wanted to hear it again NOW, hence the download. Thanks again! IBx

I have real trouble with z-share

I was able to download the other SHP from your public files (18 of) and I love it.

Or I would be pleased to recieve a link at gen593@hotmail.com

I'm busy uploading on mediafire. I will replace the link very soon.

Stuart, new link's up. Enjoy and have a nice weekend.

Many thanks for the new mediafire link

The result is a partial success each time

I notice that your public ones are on Divshare and not mediafire as I thought maybe thats the way to go.

Thanks for trying today as I see you have been busy

And dont ask me why

I tried it again but instead of hitting save at the first stage I hit Open and it ended up in this thing called secure zip express perfectly and automatically extracted to boot.

I had to send it to switch sound file converter which was my only option but I converted to WAV and sent it to my external hard drive that way so its all ready to make cd copies for mates.

Good to know it worked out fine.

Can you please re-up all the Shock Headed peters you had posted before? All the links are dead and I am desperately looking out for these. Please do so if you can.

Expect those to be here again this week.

Phenomenal work !!
Thanks a ton !!

Sadly, the link for SHP - NBB [LP] is again dead, acc. to JumboFiles. Again, i'm posting as a thank you and so i'm subscribed in case you re-up it. SHP were great, and as it turns out, not easy to find, esp. in quality rips. Lots of comments about his one, i see. Thanx for all your work here. A real learning/enjoying experience!

Copy that! And thanx! Er...has their second LP, "Fear Engine" been posted anywhere? Figure while i'm at it [etc.]....cheers!