Airmail - In A Moment/No Human Feeling 7" 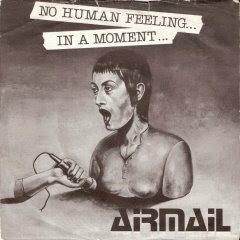 Here's an interesting 7" of a band called Airmail. Released in 1979 on their own Graffiti label.
Don't know anything about them but if you dig the early Siouxsie & The Banshees sound than you'll probably like this one too. Vocals are similar to the one of Siouxsie and both tracks are somewhat monotonous songs.

Airmail
Posted by Curious Guy at 10:54 AM

thank you! ive been looking for this for ages. great stuff indeed!

Stumbled upon this one a few months back on eBay. Yes, a little monotonous, but I like it.