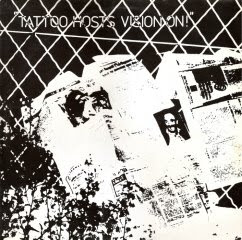 While uploading, I checked for more info on this band and I've seen that Mutant Sounds already posted it. Well it's been more than 2 years ago, so I'm going to post it anyway (it's a higher bitrate rip as well).


Not much info to be found on this minimal wave/synth band except that the main man here is Ada Wilson who also appears on the 'Hicks From The Sticks' comp. LP posted here before.


All songs were written by Wilson except the 2 instrumental tracks 'Red Pictures' and 'To Reason Why' by Dave Whittaker , and the weird 'Fantasy Island' by Ian Nelson.

what hasn't mutant sounds posted already? their log is so thick i could never go through all of it, so i would have missed this otherwise, i reckon!

Thanks, PH. Frankie has a point. MS is cool so I'm sure they won't mind. Whats with the guys who whine about people reposting things as if they have copy right claim on them? Every once in a while I come upon some heated comments..like bloggers are getting territorial. There should be a statute of limitations, like 3 days or so, then no whining allowed about follow up posters.

Agreed on all the above. Thanks for the repost cause I would've missed this great recording. This is quality!

Hi,great music ! How can I send you some of the files you're looking after on your list of wants ?

goutroy said...
This comment has been removed by the author.
10:04 PM

I love this LP. The main man behind this outfit was Ian Nelson, who was the younger brother of Bill Nelson. He was a member of Be Bop Delux with his brother, and the new wave band Fiat Lux. Tattoo Hosts Vision On also included Dave Whittaker from Music for Pleasure. Ian Nelson passed away in 2006.
Here's an early interview with him:
http://www.billnelsonmusic.com/usarchives/abm/abm06.htm

Thanks for the extra info and link Goutroy.
Frankie, I know about Mutant Sounds. Luckily I followed them from the beginning although it's hard to keep up with all the stuff they post.
Anon, feel free to contact me for uploading files:
heretix99(at)hotmail(dot)com

About reposting things: not much into posting files found on another blog then claim them to be your own. It's a bit too easy, isn't it? Ripping records/scanning sleeves takes quite some time of which I wished I had more of.

Thanks for this álbum. Ada Wilson also release in 1984 the single "In The Quiet Of My Room" which i recently posted. Three interesting versions of the same song.