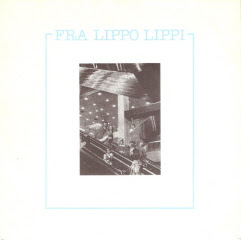 Here's the very first release of Fra Lippo Lippi from Norway. The band needs no introduction I suppose. In the mainstream music world this band is known as a "one hit wonder" with 'Shouldn't Have To Be Like That'.
I think that many readers here have heard the 'In Silence' LP, their best moment. Even 'Small Mercies' is still a good effort but later the band went completely poppy and mainstream.
This 7" shows the band in another musical form. No vocals here and way more electronic. 3 minimal synth tracks on side A, one longer and darker, experimental track on the B side.

Fra Lippo Lippi
Posted by Curious Guy at 10:00 AM

Fra Lippo Lippi also did a split single with, unlikely as it sounds, Portion Control.

Do you happen to have that?

Great blog, thanks for all you work.

Portion Control did do a split single with Die Form, in 1984 I think.

It has nothing to do with this post but do you have it?

Sorry, don't have that one W.
FLL did a split with Minox. On the same Italian label as the Portion Control/Rinf/Die Form 7".

That'll be why I got confused.

Keep up the good work.

this is another think of italy
www.discogs.com/Baldelli-Dionigi-Cosmic-Disco-Cosmic-Rock/release/1332332

Nac/Hut Report has not died for delirium.

by the way, the best fra lippo lippi track (ever) is on the "fix planet" compilation - recommended if you like the 7" here.

thank you for this one' yahoooo''

Any possibility for a re-up? :)