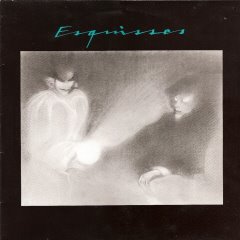 I was intrigued by this record because Steven Brown of Tuxedomoon plays alto sax on 3 tracks. I managed to buy a copy and I was really surprized. People who like Tuxedomoon will probably like this one too although it has a more melancholical feel.
Mike Shelter and SPY were the main members of this band. I even don't know from where they were but the record was released on a Belgian label that also released records of La Muerte, Nightfall In Camp, Snowy Red and the Scientists.
Any more info on Esquisses more than welcome.

Esquisses (FLAC)
Posted by Curious Guy at 1:00 AM

I own the vinyl since 1985. the blaine reininger like melancholic touch is obvious for me.

thank you for sharing this record - some tuxedomoon lovers will be glad to fill up their collection.

Hey, at least someone who knows that record! I think it's not that easy to find nowadays. Do you know where the band was from? Can't figure it out on the sleeve.

like anonymous i own this album for ages (well - decades now) and it contains some of the finest songs tuxedomoon never wrote :-)

seeing as i like tux-m this is a given choice. thanks for enlightening me with all the posts here. keep it up, yours is one of the better ones i've seen

(i.e. genuinely interesting stuff as opposed to multiple-posting for postings' sake, if you know what i mean!)

THX for sharing this! I adore Tuxedomoon...and was surprised to hear Dutch on the background of song 'first things first'; I had to listen a few times to be sure, but they are speaking clearly a dutch dialect. The recording must have taken place somewhere in the Flanders...
THX again.

I have find your blog today it's great with a lot of good older music and new wave super , is it a chance for reup this esquisses please.

Hello Marcel,
I just tried and it seems the link still works. Please try again,OK?
Let me know if you have any problem. Sometimes quicksharing takes some time for loading.

hello Curious Guy,
I know it is 3 years after you have posted this record but... is there any chance for a reup?

As I love Tuxedemoon, I 'm curious to hear this
Thx,

Hi anon, there's nothing wrong with the link. I just tried and it worked fine. Let me know if it worked out well.
Enjoy!

Definately dead link, any chance of re-uploading this rarity?

Looks like both links aren't working (I'm getting the message that the file has expired). Would really appreciate it if you could re-upload the FLAC file. Many thanks!