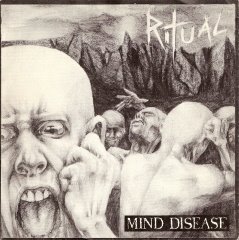 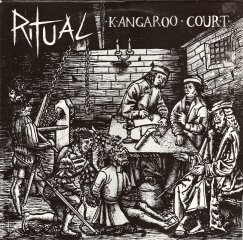 Ritual started in 1979 and were one of the first goth punk bands but never got the same recognition as Sex Gang Children or Southern Death Cult. Many compare them to Theatre Of Hate as the band also had a sax player. Prior to the 7", Ritual released a six track demotape.They also recorded tracks for an LP called 'Songs For A Dead King' but was never released.
The band fell apart as drummer Ray Mondo and guitarplayer Jamie Stewart were asked to join Death Cult. Ray Mondo later switched the drummer seat with Nigel Preston (ex-Theatre Of Hate) to play in the last line up of the (early) Sex Gang Children.
Vocalist Errol Blythe and bassplayer Mark Bond joined Spon (ex-UK Decay) to form In Excelsis (of which I will post some records of in the future).

Ritual
Posted by Curious Guy at 12:42 AM

Nice stuff. I remember getting these in some little London record shop, back in '84 was it? No, most likely '86. Anyway, loved them both, think they were recommended as Southern Death Cult/UK Decay sounding. Thanks for the share.

Great band! Thanks for these...

Recomended to fans of all the posipunk bands and the like. Sounds like they were a big influence on Ausgang.

"Songs for a Dead King" was release on cassette

The link is down. Could you please reupload it..? Thanks.

Both links are down.

Would be grand if anyone could post Mind Disease...