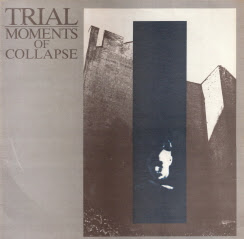 Excellent peace-postpunk album of this San Francisco band. This is Trial's second release after the 'Inborn System' 7" released on Freak Records (small label with 2 releases. The other one is the '1984' 7" of Crucifix). The songs on the 7" showed already the way they were heading. Found it on Strange Reaction(RIP), the first music blog I ever knew.
Opening track 'Lobotomized Visions' has an industrial feel due to the use of metal percussion.
Cyrnai is the most known member of Trial. Discogs states that she was also a member of Sleeping Dogs (7" on CRASS Records) and Treason (1 song on the 'Peace/War' comp.). She also released solo work, mainly tapes but also a 12" called 'Charred Blossoms' which you can find on Mutant Sounds. Some tapes of her can be found on Shards Of Beauty. Her work is way more experimental. Seems she was active until the late 90's but no further info as the Cyrnai website is down.
The album is not so hard to find probably 'cos Trial had a distribution deal with Rough Trade.
Get this one! You won't be disappointed.

Note: tracks 5&6 ripped as one track.

Moments Of Collapse LP (Communications Syndicate-CS 001-1986)
1. Lobotomized Visions
2. Unshackled In The Garden
3. Detached
4. Anatomy Of The Trap
5. Crimson Retrospect
6. Chant 4501
7. The Border
8. Of Speech And Thought And Stripping Gears 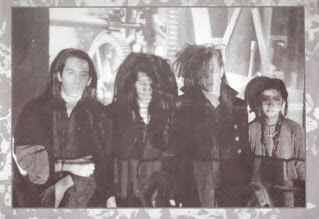 I have this LP and was going to post it on my blog once I get a working record player... oh well. just started the DL, but it'll be nice to hear it again :-)

Thanks for this, I still only have the single.

thanks for this and all the linds to the Cyrnai stuff...I love her cassettes! do you have any of her other tapes?
thanks

Wow! What a great day this is to find this! I had this album in the late 80's! So good to hear it
again! Thanks!!

Hi, I saw your post on Days of our Youth about the Red Beret Lp and was wondering if you could upload it sometime? I have it and will agree it was a letdown compared to the compilation tracks I heard first, but would still love to hear it again and have saved on my computer. Thanks!!

I have an original Trial "Moments of Collapse" shirt that I bought off a girl's back a few years ago. I am looking to sell it.

I would love to have that shirt!!! I absolutely love this band. Thanks for posting it here. One of my very favorite all time releases ever! A masterpiece.