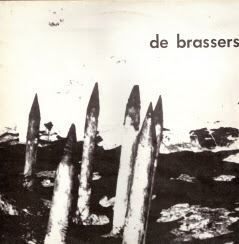 De Brassers were another cold wave band from Limburg, Belgium. From the same scene as Struggler and Siglo XX. De Brassers even opened for Killing Joke in Brussels.
This 12" is the second release of the band. Their first one is the self-released (and ultra-rare) 'En Toen Was Er Niets Meer' 7"(And Then There Was Nothing Left). The band fell apart in 1982, mainly of drug issues. But De Brassers ressurected with a slightly different line-up and are still doing gigs occasionally.

And there are 2 songs on YouTube (embedding is disabled):
En Toen Was Er Niets Meer
They Wanted Us Away

You mentioned Struggler... I found a song by them a few months back and was quite pleased. Do you have any info on them? Or better yet, a release maybe??

Nionim, i have their album and 'Recrudesce'12". The first 2 7"s are impossible to find these days. Still need to rip them.

The link is broken again, please repost it..

Your blog is awesome men!!!