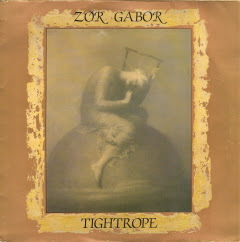 Some people at Texas Jumblesales asked for the extra track to be found on the 12" version of the 'Tightrope' record of Zor Gabor. Here it is. Personally I think it's the least interesting track.
Zor Gabor had John McKay in the band. He was the first guitarist of Siouxsie & The Banshees.
You can get the other 2 tracks of Zor Gabor here.
Released on In Tape (ITTI 042) in 1987.

UPDATE! Fritz Die Spinne pointed me out on the 12" version of the title track. This one is indeed much longer than the 7" version. About 7 minutes, not a re-mix though...

Update! As Texas Jumblesales is not around anymore, here the complete 12":

Remember when 12" singles usually had an almost unidentifiable extended version with an extra minute of music in the song, as opposed to drastic remixes?

I will have a post again on Friday...I am preparing to move and have been a bit too busy with other stuff.

Hey Fritz,
the 12" version of 'Tightrope' is over 7 minutes! Thanks for pointing that out. I should post it. It has a very long intro.


Let me know what you think of my new post on a Wayne County tune covered by 45 Grave...I abit rushed but I hope it makes sense.

Only now discovered this, beautiful! Thank you!