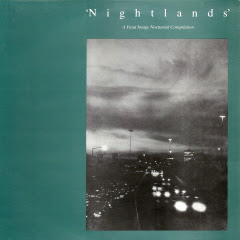 Interesting experimental/ambient compilation on Final Image, the label run by O Yuki Conjugate. Muslimgauze offers a remixed track from the 'Abu Nidal' LP. Pump also had an LP on Final Image and was posted some time ago here. Biting Tongues were Factory artists. More albums can be found on Annie's Animal's blog. Gush offers a soundtrack to an unpublished screenplay. Bourbonese Qualk's track is from an unreleased lp called 'Lullabies'. Track from John Avery from forced Entertainment Theatre's '200% & Blood Thirsty'. He also had an LP on Final Image. Track from Tim Story from an unreleased album called 'Threads', recorded in 1980. Mute Calm was another project of some members of O Yuki Conjugate. Their track from a forthcoming (but, as far as I know unreleased) album. Human Flesh were from Belgium and connected to Bene Gesserit. Their album has been posted on The Thing On The Doorstep. And finally O Yuki Conjugate. Their track has been re-released on the 'Undercurrents (In Dark Water)' CD.


Nightlands
Posted by Curious Guy at 1:53 AM

Hi, I've check your blog and it's just great. I'm doing quite the same with mine, so I've added you to my favorites.
Please take a look inside and give some feedback.

hi! nice comp, but i think track #4 is missing from the zip file!

I'll check! anyone else has track 4 missing?

I just dl'd the file and mine was complete. Maybe check the file again? Otherwise I'll do track 4 for you .

hello, i'm looking for the john avery's LPs:
Nighthawks (on final Image like this compil) and
Jessica In The Room Of Lights (Technical Records)
Thank for your work, here!

Nice music, thanks for posting!

any chance for a new link?