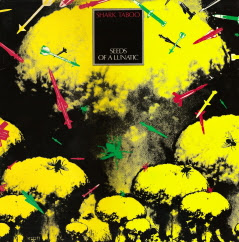 Shark Taboo was a female-fronted gothwave band from London. 'Seeds Of A Lunatic' is their first album. What sets them apart from other goth bands is the socio-political content of the lyrics. A song like 'Patriotic Flag' deals about war, 'Cage' is about animal abuse.
'Big Sell' and 'Troineann Siad' were released as a 7" before, on Crisis (same label as Stiff Kittens) and Lambs To The Slaughter respectively. 'Cage' also released as a 12" on Lambs To The Slaughter.
Shark Taboo lasted till the early 90's and released 1 more 12" and 3 more albums, which I've never heard.

Seeds Of A Lunatic
Posted by Curious Guy at 1:09 AM

Shark taboo line-up was Gil (vocals), John Triteos (gtr) who sadly died of leukemia in the 1990s, Tony Newman (keys) who is now the leader of Croydon council (weird!), Pat Fraser (drums) and Suzi Webb (bass) who was in the original Slits.

Reupload it please, could you be so kind...

Please re-upload again! :)
I had this LP, but my computer was formatted, and I have to say goodbye to this classic.

Curious Guy, THANK YOU SO MUCH!!

I hope you can re-upload the other Shark Taboo's LP's.