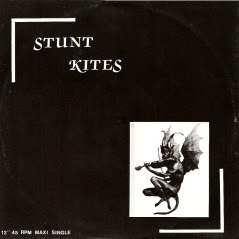 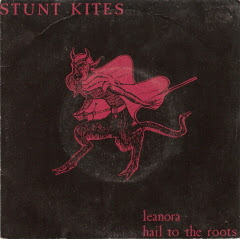 Stunt Kites are one of the lesser known postpunk bands from Sheffield. Their first appearance is a track on the '1980: The First Fifteen Minutes' comp. 7" on Neutron Records. Other Sheffield bands on this comp. are Clock DVA, I'm So Hollow and Vice Versa. Vice Versa ran the Neutron label and was the band who later morphed into ABC!
Couldn't find a lot of info on Stunt Kites except that they did a reunion gig in 2003 together with long time fan Jarvis Cocker of Pulp.
Here are the two records Stunt Kites released. First one released on the well known punk label Pax Records. Second one is the first Criminal Damage release. You'll probably notice some vinyl noise on the B side but what does one expect if you want to put an 8+ minutes song on a 7".

More good work Curious Guy - have wanted to hear these for a while now.

Hah! You said they were on your list "to do" months ago. Wondering when you'd get to these! I wonder no more.

Didn't forget about it Fritz. Enjoy!

hello! would you mind reuploading the self titled? thanks in advance :)