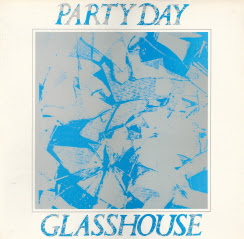 Here's another long forgotten wave band. Party Day were from Barnsley (same city as The Danse Society) but I don't know when they actually formed but I guess around 1981. Their 1st 7" 'Row The Boat Ashore', was released in 1983. In 1984, the band released another 7" called 'The Spider'. Next one is the 'Glasshouse' 12". This record was issued on Rouska Records, contrary to all the other records that were self-released.
The 'Glasshouse' LP was issued in 1985 and it's a great record IMHO.
Party Day released another album 'Simplicity' in 1986 before falling apart.
There is a Party Day fanpage here.

thanx for the great work,man.
I´m a big post-punk & goth fan.take a look at this:
http://www.mickmercer.com/gothhistory1.html

hi! are you familiar w/ an 80's band called THE WEDDING? they had a song called 'tomorrow i set sail'. they kinda sound like early u2 or cactus world news. but they had a gloomy/dark style.

Hi Dr Lorax,
I should definitely get those M. Mercer books. Looks very interesting. Just need to spend less money on buying records :)
To Jess Manuel: never heard The Wedding. I checked around and they seemed to have released a 12" in 85 with that track on it.

I thought I knew all the great alternative from 80`s
but I was wrong. Great album,
thanks for oploading :o)

This is the best blog on the planet, keep up the great work man.. wow! & I thought stuff like the Art Objects & Blue Orchids were very obscure, boy i was very wrong...