Five Or Six - A Thriving And Happy Land 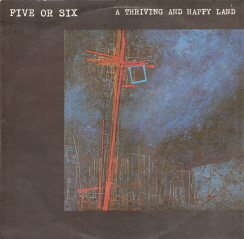 Five Or Six were an experimental post punk band. This album was their only full length as well as their last release. Core members were David Knight, formerly of The Fast Set, and Ashley Wales. Both members would later join Karl Blake to form the Shock Headed Peters. Ashley Wales soon left and can be found in Spring Heel Jack.
David Knight also appears on records of Danielle Dax and Lydia Lunch. He also creates ambient soundscapes under the Arkkon moniker.

A Thriving And Happy Land

is there any possibility you could load this album onto your usual provider? im just a bit of wary of having to download the megaupload toolbar??!!

btw, is the material on this album in any way similar to their track on the "pillows and prayers" comp? i think the track is called "portrait"?

thanks for a superb blog!

Hi there,
yes the album is in the same style. I don't think you need to download the toolbar. Just tick the code and you need to wait about 45 sec. before download. Tried to upload this one 2 times on quicksharing but the connection broke off twice. So I was getting a bit pissed and chose another uploader.

Thanks again for the latest stuff. I am very impressed by some of the bands I got last time like VEX how damn good are they? And of course No Trend is fucking fantastic too!

ps. just moved house etc so will try to get you the Sune gronlandsrocker stuff reposted sometime later in week. ds

I will try to upload this on quicksharing ASAP. Just tried but the connection broke off.
It's just that megaupload wants us to download their toolbar but a lot of people are suspicious about this (including me). It's nearly impossible to get free slots here in Belgium and I've read that the same problem occurs elsewhere.