The Cassandra Complex - Something Came Over Me 12" 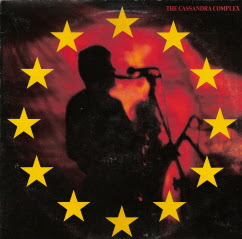 Here's the 4th 12" of The Cassandra Complex. This one was released on Belgian label Play It Again Sam which is still around but is a 'big' indie label now.
The Cassandra Complex offer us their version of the Throbbing Gristle song 'Something Came Over Me', which was one of the cover songs in their live sets. The 12" is completed with two longer tracks of their own.
For those who missed the previous posts on The Cassandra Complex; they have been re-uploaded. The 'Feel The Width' live album has already been ripped so it will appear soon.

Cassandra Complex is always a nice pleasure..really thanks.

any And Also The Trees early demos ? will be very interesty.

Criss, you can find some And Also The Trees demos on Shades Of An Audio Daydream blog (see link in sidebar).

I'm not commenting on this post, though as ever, great blog, but i'm curious about some posts of english paul, of the texas jumblesale days, and didn't know how to reach him.
if you could pass on my email:
sidecinema@hotmail.com
thanx

rudeboy noah, I've sent your email address to English Paul. Haven't heard from him for some time though...

I didn't know that. I'll check that blog. Thanks again

Glad I wandered in here now, Yeah Yeah Noh one minute, then the majesty of Roland and the boys the next.

Dur....I meant Rodney, of course. How embarrassed am I? LOL

Oh, how awsome! Bought the record at a vacation (school’s over trip) in Fierenze 1988. Lost it in one of my moves. Now i can hear it again. Sweet memories! Thanks!