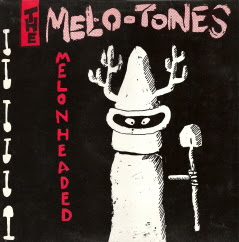 The 'Melonheaded' 12" is the second release of The Mel-O-Tones. First one is the 'Bomb Sutra' mini album.
They were from Liverpool and both records were released on local label Probe Plus.
Here's what reviewer Cleveland wrote on The Mel-O-Tones on Julian Cope's Headheritage site:
Their music was primarily a collision of Beefheart and wracked psychobilly but genuinely stranger again. Singer Frank Martin could growl out the acid lyrics with true Van Vliet abandon, whilst Martin Dempsey's guitar sliced your head off.
After the band split up, some members formed the Walking Seeds.
There are 2 different versions of 'Happy Hour'. The record comes with a small comics booklet which I included in the file.

Melonheaded
Posted by Curious Guy at 9:47 AM

Excellent stuff. Thanks! Curious guy, do you intend to upload the 'Bomb Sutra' mini album? It would be nice to get it too...

The 'Bomb Sutra' mini album is on my way. Will definitely end up here, next month at last.

I'm interested in this vinyl.
Mel-o-tones'sounds belong to psychobilly?
Do they use Wood bass?

Thanks so much for this!!!

Any chance of a re-up for Bomb Sutra?

Hi Nathan, can't find the Bomb sutra file for the moment. Burned it on a cdr but that one I can't find either. Will pop up if I have a little more time to search for it. Hope you have a bit of patience.