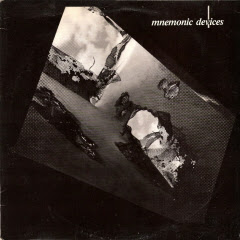 Sole release of this moody postpunk band from Huntington Beach, CA. What makes this band special is the use of a violin.
Best known member is Geofry Kaa on guitar. He was a member of punkband The Klan and, after Mnemonic Devices, started Sextet with members of The Crowd. It seems that he's still busy making music mostly guitar improvisations.
Here's what you can read on the promo sheet:
In the few months since their Los Angeles appearance, Mnemonic Devices have cut through the drone of L.A. ennui and have commanded the attention of both critics and audiences. There is fiery intelligence in this music that mixes passion and intensity with a greater musical sensibility. What Mnemonic Devices create is a dramatic sound driven by insistent rhythm. Mnemonic Devices are not political or rebellious. Their music is a testament of human feelings, thoughts and experiences.
Venturing out of Huntington Beach, California in May 1982, Mnemonic Devices began a barrage of local appearances - debut performances at Al's Bar and the Cathay de Grande moving quickly to bigger venues at the Golden Bear and the Roxy and a live broadcast over KPFK radio. With each show, audience and enthousiasm have grown. Even at first exposure the band's uniqueness is striking.

noinim said...
This comment has been removed by the author.
9:39 AM

this is a pretty good 12-inch. it took me many years to find it on mp3. have you seen the footage from new wave theatre?

(sorry for deleting my previous comment, but i messed up the video link.)

Was just about to do a write up about this EP..... My friend Steven's aunt was the bassist, Linnea. Came across this EP when I was in Costa Mesa when I was going to college. Makes me happy that someone else appreciates this band :)