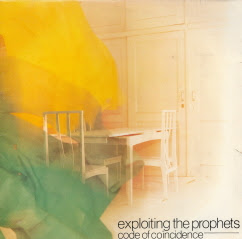 The 'Code Of Coincidence' LP was the band's first vinyl release. Exploiting The Prophets were from Tilburg, The Netherlands and plays quite exciting wave music. Originally they were called 'Exploiting The Profits' and released the 'The Thin King Man' tape before, also on Eksakt Records. They also appeared on the 'One Hour For Spits' comp. tape which was packaged in a sponge.
A year later they would release their last record, the 'The Thaw' mini album which will be my next post.

Code Of Coincidence
Posted by Curious Guy at 12:14 PM

Thanks! Funny enough, I just played my vinyl version of this yesterday.

Yeah, it's a very funny coincidence, so I had to mention it. :)

I used to frequently shop at a very cool record store in the early 80's in Toronto called The Record Peddler and they turned me on to all these great imported records, (Tagmemics, Folk Devils, Mecano, Flue, Eyeless in Gaza, Complot Bronswick, Fra Lippo Lippi, Flowerpot Men (the 80's version) Spear of Destiny, Anne Clarke, Dormannu, Saigon, Died Pretty, Brilliant, Specimen, Weekend, Swinging Laurels, Skeletal Family, etc...). I believe The Record Peddler even did some distribution at one point, including The Dead Kennedy's 45, "Too Drunk To Fuck." I still listen to my LP's and 45's on a regular basis. In fact I'm looking at the sleeve for Exploiting The Prophets right now. It has the lyrics to 22. New England on it and a song list.

Anyway, thanks again very much for everything you're doing here. It's a great site and you post incredible stuff.