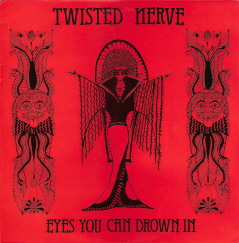 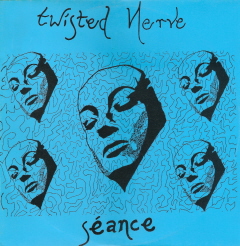 Here's the last post for this month.
Twisted Nerve from Edinburgh, Scotland are one of the most underrated but one of the best goth punk bands there were.
Started in 1978 as The Insults, the band played full on punk back then. First recordings of Twisted Nerve can be heard on the 'Mint Sauces For The Masses' comp. 7" on local label Playlist. The band released another two 7"s, 'Caught In Session' and 'Five Minutes Of Fame', on which you can hear their transition from punk to a darker sound.
After some line-up changes, the band released the 'Eyes You Can Drown In' 12" on Criminal Damage, followed by the 'Séance' mini album, a record they released themselves. Both these records are very hard to find now.
It's a shame that Twisted Nerve never got reissued until now. Maybe because they weren't from London or Leeds or so? Well, here's your chance to listen to this cult band.

Eyes You Can Drown In (FLAC)

Once again you make me happy with these ultra rare Twisted Nerve vinyls. Thanks a lot. Billy

Hello Billy,
nice to know. If you should care, there are 2 copies of the 'Séance' album on ebay right now.

Top quality as ususal! Thank you.

Thanks for the appreciation, coolanddeadly.
Greetings from Gent.

i must join the crowd of people that thanks you for getting into the light such rare music .

great! is anyone able to share the 'Mint Sauces For The Masses' Compilation 7''???
Cheers,
Phil

Hi!!! Thank you very much for this upload, it was sooooooo hard to find!!! I'll check on ebay after hearing this ;) Kisa.

I have just found this blog via KYPP, excellent stuff cheers for reminding me of some classic pieces of music and that whole post punk thing. I am the proud owner of both these vinyls as well as Five Minutes of Fame & Caught In Session 7's. I didn't know the releases were that rare...

many thanks - fel bedankt!