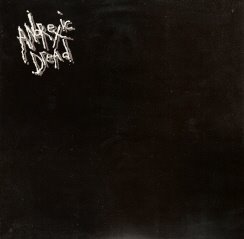 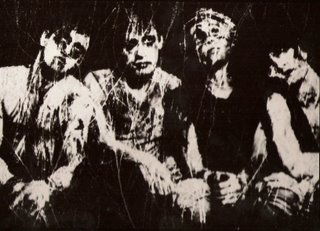 One of the greatest records of goth punk horror.
Anorexic Dread were from the Southend, UK and were formed in 1983 but already split up in 1985. In their short existence, they managed to record some tracks for a record released on the Criminal Damage label. They were influenced by The Birthday Party, Killing Joke and the Cramps.
You can hear the Cramps influence very well on 'Tick Tock'. But the standout track is 'Tracey's Burning' and is still considered as one of the best goth punk tracks ever released. 'Epitaph' is more an outro to 'Tracey's Burning' so I didn't seperate this track on the listing below.
My only small complaint is that there could have fit a second track on side B.
For more on Anorexic Dread, check the Southend Punk site page here.

Hi. Are you familiar w a band called LULU KISS ME DEAD? They were from the 80's and was signed to Beggars Banquet/Situation Two. If you know 'em, is it possible to post a couple of songs? especially the song "Spades". luv that song.

Sorry but never heard that band before. I'll see if I can find more of them in the future. How do they sound like?

Hey dude, I like your blog. Gotta check out some of the stuff later today...

Something is wrong with the file. meaning i cannot download it. little help?

Hello Curious friend- I searched a while for this one, and I should've known I'd find it posted here... long ago no less... in looking up the band's discography, what little there is, I found this on discogs.com:

Not only was I impressed to see a different version of Tracy's Burning, but a list of impressive other acts as well. Of course I can't find this soundtrack- know anyone who might have it? Just putting feelers out...

Hi sheerinertia, I have that album. There's no unreleased recordings on it. The Anorexic Dread track is the same one but edited so it lasts only half as long as the original. Maybe I could rip it if it's not on any other blog.

Thanks for the cool entry on your extensive site. I was the keyboard player in the band (Magoo was the nickname given to me by the singer). It might be worth adding to your web entry that the guitarist in our band was Perry Bemonte who is now the guitarist in the Cure.
cheers
Patrick Moriarty
moriartyparty@hotmail.com

This has been one of the bands that are revolutionized the goth punk music. I love members style and their idealistic music.

Wow! I was wondering if I would ever hear these songs again! We picked up this gem in Germany in the 80s. Or at least one of my friends did. I had a taped copy. Sure wish that link worked...