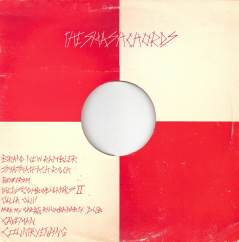 By request: The Smashchords from Seattle was a band of two members only playing guitar. Expect some lo-fi garage noise without drums and vocals. These guys played on cheap copy guitars and recorded in mono.
Chris Bohn of NME on The Smashchords: "Nostalgic for the day you got your first guitar? Can't relocate the excitement of that first gloriously untutored thrash? Well, if you really can't restrain the impulse, regress along with The Smashchords and experience again the idiot happiness of that early liberating rush of noise."
Smashtrade was a subsidiary of Rough Trade specifically created for the band. As far as I know, The Smashchords released two tapes: 'Deep And Dumb' and 'The History Of'.
My copy is a little warped so you'll hear some background noise, especially on the second side.

The Smashchords
Posted by Curious Guy at 9:55 PM

Yup....I came across this a few months back and picked it up because of the Rough Trade/Smash Trade label and the rad design/die-cut/etc. and I was surprised and stoked to hear proto-Harry Pussy mono-cassette recorded guitar clang. A definite oddity.

the Smashchords (unwittingly) taught me to play guitar....I especially thank them for Planoblaster on "Deep and Dumb".....

do you know the names of the two members.